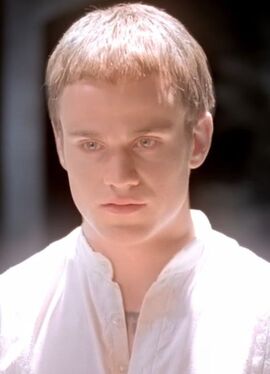 Godric is a powerful and ancient vampire on the HBO original series True Blood. Played by Danish starring actor Allan Hyde, Godric makes his debut on the episode "Never Let Me Go" in the series' second season. A recurring character through the series' second, third, fourth and fifth seasons, Godric was the vampire sheriff of Area 9 in Dallas, Texas. An ancient vampire over 2,000 years-old, Godric suffered much cruelty at the hands of man and his own maker, which instilled in him a great amount of hatred and resentment. So much so, that he spent most of his existence hunting humans for sport and passing on his disdain for the living to his progenies, Eric Northman and Nora Gainesborough. However, after a millennia, Godric realized that all the senseless killing had only left him feeling detached and empty. He changed his ways and became compassionate, and even loving, towards humans. Deciding that 2000 years was enough, he chose to meet the sun, meeting an untimely demise in the Season 2 episode "I Will Rise Up", but reappears throughout several flashbacks through subsequent seasons. Godric was last seen in the Season 5 episode "Gone, Gone, Gone".

Godric's personality as a human is completely unknown. However, for the first 1,000 years he lived as a vampire, he was a violent, bloodthirsty savage with no regard for human life. He was also a believer in moral nihilism, as he taught his progeny that there was no right or wrong, only survival, or death. However, he abandoned this belief in later life, and as centuries went by, Godric began to sympathize with humanity and other forms of life. He came to realize that the human race's fear and hatred of vampires was well founded, and that he had contributed to it. He evolved over time and his wisdom and compassion grew. He is perhaps the best-natured vampire seen on the show.

Ultimately, Godric voluntarily ended his existence, deciding that 2000 years was enough. Despite the great degree of compassion he exhibited in later life, Godric was still capable of acts of violence when properly motivated, such as the snapping of Gabe's neck after his attempted rape of Sookie.

"Eric, the blood is sacred."
―Godric[src]

Godric was born some time in the first century B.C. in Gaul, possibly on the coast, as the Gauls worshiped the elements, and the tattoo on Godric's left arm is a tribal symbol for water.

Godric was captured as a small boy by the Roman army during one of Julius Caesar's invasions of Gaul which historically took place between 58 B.C. and 52 B.C. He was brought back to Rome and sold as a slave to a roman master, who eventually revealed himself to be a Vampire. His new master was cruel and sadistic. He branded Godric, as well as physically and sexually abusing him as he grew into a teenager.

When Godric reached the age of 16, his master finally turned him. Godric stayed with his maker for an unknown period of time, until he had learned all he could from him about being a Vampire, and had mastered his new abilities. He then murdered his maker, seeking revenge for the abuses he had suffered at his hands during his Human life. This is an extremely rare occurrence in Vampire history, as a progeny is usually extremely loyal to their Maker and vice versa, bound to obey their commands, and are always physically weaker than they. Thus, exactly how Godric was able to murder his maker is not known. The act got him into serious trouble with the ancient Vampire community, so he fled into the wilderness to escape their justice, living feral and alone for centuries.

Ever since he had been captured by the Roman army as a child, Godric had been fascinated with armies, and as a vampire, often followed them on campaign, watching or even taking part in night time battles or raids for fun, and feeding on and killing the wounded. Some time in the early 10th century A.D., Godric was in Britannia, and saw the Viking Eric Northman taking part in a night time coastal raid. Extremely impressed with Eric's skill on the battlefield, Godric followed and caught up with him the following night, killing his two surviving comrades, and offering the fatally wounded Viking immortality as a vampire, turning him. ("Never Let Me Go")

By 1665, Godric and Eric were living in London, England during an outbreak of the plague. While doing a favour for King Charles II, Eric came upon a young woman, Nora Gainesborough, who had become infected by the plague whilst caring for victims of the epidemic. Intrigued by Nora's courage, Eric brought her before Godric, who turned her.

In 1793 Godric and Eric were living in Paris, France, and were good friends with a vampire serial killer named Guerra.

Godric became the Vampire sheriff of Area 9 in Dallas, Texas at least 100 years before 2008, though in truth, it could have been much earlier. Godric eventually established a nest in Dallas which included Stan Baker and Isabel Beaumont, who became his most trusted underlings and with whom he shared both his home and wealth.

During World War II, Godric and Eric posed as Nazi Schutzstaffel agents in order to infiltrate "Operation Werewolf". In 1945 they tracked a werewolf down to a house in Augsburg, Germany. The werewolf attacked and killed an American soldier before turning on Eric, but Godric stabbed her in the arm with a bayonet, pinning her to the wall.

Eric demanded to know who her master was, but the werewolf said she'd only tell them if he let her drink some of his blood. Godric was deeply offended by the idea, as vampire blood is sacred. Eric, however, didn't care. He bit himself and allowed the werewolf to feed from his wrist. She then revealed that her master was a vampire. Eric was shocked. The werewolf took advantage of his distraction by pushing Eric to the ground and attempting to stake him. Godric intervened and snapped the werewolf's neck.

Godric lectured his progeny about maintaining control of his emotions, before promising to hunt the blasphemous vampire down. Shortly after this confrontation, Eric and Godric parted ways. They would not meet again for many decades.

"A human with me at the end, and human tears. Two thousand years and I can still be surprised. In this, I see God"
―Godric[src]

Unbeknownst to his underlings, Stan Baker and Isabel, Godric offered himself to the Fellowship of the Sun church to "meet the sun." Eric, as his progeny, was notified of Godric's disappearance and made a deal with Sookie to use her telepathy to help find him. ("Release Me")

When Eric heard for sure that Godric was being held by the Fellowship, he rushed to his aid and offered himself to the church in place of Godric. In the chaos, Stan showed up with reinforcements to start a conflict with the "anti-vampire" church, but Godric stopped him. Preaching a message of peaceful co-existence with humans, Godric defused the situation and returned to his nest with the vampires of the area. ("Timebomb")

Believing that his 2000 year existence was a long enough life, Godric chose to meet the sun of his own free will. An emotional Eric tried to stop him, however Godric had evolved to the point where he could no longer exist in a manner that required violence and bloodshed.

Although Eric demanded to stay with his maker to their deaths, Godric commanded Eric to seek shelter from the sun. It was Sookie Stackhouse who stayed by Godric's side in the end. Godric asked Sookie if she believed in God, she answered confidently, "Yes." Then he asked how she thought God would punish him, and Sookie answered, "God doesn't punish. He forgives." Then Godric turned, feeling the sun starting to rise. Sookie asked if he was afraid, and he said "No, I'm filled with joy."

When she began to cry, he was amazed that the thought of his death would make a human cry, and that after 2000 years on this earth, he could still be surprised. He asked Sookie to watch out for Eric after he was gone. Sookie agreed. Godric turned to the sun and burst into a beautiful blue flame. ("I Will Rise Up")

"Forgiveness is love. Love is all."
―Godric[src]

Godric appeared as a spirit to Eric, or possibly this was just Eric's conscience. Bound by silver to Russell Edgington, Eric was attempting to meet the sun; however, Godric appeared to him. Godric attempted to deter Eric from killing himself and Russell, urging him to forgive the vampire who murdered his family, saying "Forgiveness is Love. Love is all." He also tells Eric that peace follows death for all beings, even Russell. After Sookie saved Eric, Godric smiled at them before disappearing. His words later inspire Eric to entomb Russell in cement, in order to keep him from finding any type of redemption or peace. He later appears as Eric is burying Russell alive, and expressing his sadness at what Eric has become. He also argues that all beings deserve peace upon death, even Russell, and expresses his sadness at the hatred that has consumed Eric. Eric yelled at him that "This is what I am...This is what you made!" He then watches as Bill and Eric bury Russell, and then sadly departs. ("Evil is Going On")

"You are incapable of love. You are damned…You cannot be saved. You are a creature of death and the living are good for only one thing, and it is not love. Drink."
―Godric[src]

While Eric is watching Sookie sleep, Godric appears to him. He is evil and not the peaceful Godric we've come to know. He eggs Eric on, coaxing him to drink from Sookie. He grips Eric by the throat and forces him downward to Sookie. They both drink from her- until Eric wakes from the nightmare. Eric finds comfort in Sookie's bed. He asks about Godric and Sookie tells him how much he loves him and misses him. ("Me and the Devil")

"Save her my son."
―Godric, to Eric Northman[src]

Godric's spirit appears before Eric once more, during the latter's participation in a massacre of humans during a wedding rehearsal dinner. Godric implores Eric to turn away from the violent path he has embarked upon, and to persuade his sister Nora to do the same. ("In the Beginning")

A vision of Godric appears before Eric and Nora after they consumed Lilith's blood. Godric tries to tell Eric and Nora this is wrong and that he has evolved. He denounces Lilith as "a godless god". At this, Lilith appears and rips off Godric's head. ("Gone, Gone, Gone")

Godric possessed the common powers and weaknesses of a Vampire. Due to his advanced age, he was one of the most powerful vampires seen in the series. And was far stronger than most vampires such as his underlings and his progenies, Eric and Nora. Russell Edgington and Macklyn Warlow are the only vampires (that have physically appeared on the show) that are older than Godric himself. They, along with the Lilith-augmented Bill Compton, are the only vampires who would be more powerful than him. He also needed very little blood to exist, but was very vulnerable to sunlight.

For a vampire, Godric had amazing self-control and love for humans. States that due to his age that he has outgrown the vampire lifestyle, which leads to his suicide.

In addition to his vampiric powers, Godric was also a skilled linguist. His native language, Gaulish, was extinct by the 6th century. However, Godric was also fluent in English, French, Swedish and German.

Godric is an Old English name derived from the root words "God" - "ric" which means "The power of God." "Ric" being "Power/Rule."