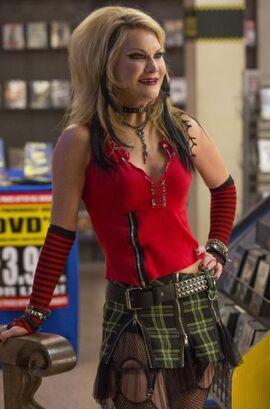 "Might as well just leave their wallets at the door. Because when the sun comes up on Fangtasia, there won't be anything left in them anyhow."
―Ginger, to Pamela Swynford de Beaufort[src]

Ginger, a human that waitressed at the vampire nightclub Fangtasia, is a recurring character on the HBO original series True Blood. Played by American co-starring actress Tara Buck, Ginger makes her debut on the episode "The Fourth Man in the Fire" in the series' first season. Revealed to be the person who originally established the nightclub in which she is employed, Ginger's idea was glamoured from her memory by Pamela Swynford de Beaufort, one of her vampire employers so that the latter could steal credit. Ginger remained a prominent character through the series' first, second, third, fourth, fifth, sixth, and seventh seasons, and was last seen in the episode "Love is to Die" in the series' seventh, and final, season.

Ginger is weak-minded and timid, though often not afraid of saying what's on her mind. By working around vampires she claims to have lost a lot of weight as she forgets to eat. She is also shown to scream a lot.

Ginger is shown to be quite open-minded about vampires and has shown loyalty to Eric without intimidation or glamouring. She is however, not a reliable asset to the vampires due to her inability to keep secrets. This may be due to the fact that Pam and Eric have glamoured her so many times, it affected her mental state causing her to often react to every single moment by screaming at the top of her lungs.

Ginger seems to be obsessed with Eric Northman as seen in the flashback when Fangtasia was still a video store.

Ginger has a kind personality as well.

Ginger was employed at Fangtasia as a waitress. She has been working there for 15 years. ("The Fourth Man in the Fire")

The vampires at Fangtasia do not bother her because she works for Eric, Pam and Chow and therefore she belongs to them, making it illegal for another vampire to bite her. By working around vampires she claims to have lost a lot of weight as she forgets to eat. During the day she is often at Fangtasia cleaning or just relaxing as she enjoys being around vampires. She is also shown to scream a lot.

Ginger first came into Eric and Pam's employ in the 1990's, back when Fangtasia was a video store with a wide selection of films. She was a fan of the vampire genre and immediately applied for a job when she met Eric. Ginger came up with the concept for Fangtasia after vampires came out of the coffin. She told the idea to Pam, who stole it from her by glamouring her.

When Fangtasia was robbed, and several thousand dollars stolen, Eric asks Bill for Sookie's help. Ginger is there. She is the last of the witnesses of the robbery. She knows who stole the money, but she has been glamoured by Longshadow, the actual thief.

Eric is somewhat protective of her; not wanting other vampires to harm her unless they want a true death.

After Sookie finds out that Longshadow has stolen the money, Longshadow jumps forward and tries to bite Sookie, but Bill grabs a plank of wood and kills Longshadow instead.

Ginger has to be glamoured into forgetting because she saw the whole thing. It was either glamour her again, to the point of insanity, or turn her into a vampire. Before the whole attack, Ginger was mean to Sookie, but, later after she was glamoured again, she was nice to Sookie and says: "Nice to meet you Sookie. Oh, you don't have to be afraid they're really very nice here."

"Who the fuck are you?"
―Ginger, to Lafayette.

Just as Ginger comes to work, Lafayette emerges from Fangtasia's basement. When he tries to escape, she grabs a gun from behind the counter and shoots him in the leg keeping him from escaping all while squealing rather annoyingly.

In a later scene we see her walking to Fangtasia. She is offered "100 bucks" by Sam to let Arlene's two young kids hide inside the bar.

Ginger is at Fangtasia when Nan Flanagan and her men come to interview Eric and Pam. She becomes scared and screams when Eric is silvered. Nan notes that Ginger has been glamoured so many times she is unable to remember her last name. ("Everything Is Broken")

Eric talks to her in a sweet tone,"Ginger dear, where do you live?"; a dark contrast on how he treats and talks to Yvetta his other human employee and lover. She is seen freeing Pam from a silver shackle who then feeds on Ginger. ("Fresh Blood")

Lafayette goes to Fangtasia looking for Eric to apologize to him, but instead he encounters Pam. Before she tries to kill him, Tara and Jesus go down the stairs with Ginger. Tara has a gun with wooden bullets which she uses to force Ginger to guide them to the basement of Fangtasia. In the middle of the argument Ginger escapes, squealing annoyingly as she usually does. Pam just rolls her eyes and keeps listening to Tara's proposition. ("If You Love Me, Why Am I Dyin'?")

Ginger, still working for Pam and Eric, is instructed by Pam to give her the 6 shots she needs in order for her face to heal from the full body peel Dr. Ludwig performed. Pam also trusts Ginger to hold her in place should Antonia's plan make her meet the sun. Once the spell causes Pam to desperately try and escape into the daylight, Ginger uses her own body weight to keep Pam's coffin from opening. ("Cold Grey Light of Dawn")

At Fangtasia, Pam throws a fit over Sookie stealing Eric away from her. As she bursts into tears over losing her Maker, she is consoled and hugged by Ginger who shows bravery after being told by Pam not to touch her. ("And When I Die")

Ginger continues to work at Fangtasia and is bemused when Pam arrives covered in dirt, asking why she is dirty. Pam explains that she has been underground and asks Ginger what her excuse is. ("Authority Always Wins")

When Elijah becomes the abrasive new sheriff for area 5, Ginger becomes part of Tara's plot to kill him. She feigns death from a botched attempt to be turned. When Elijah checks her on Tara's behalf, Tara decapitates Elijah. Ginger responds with her characteristic screaming frenzy. ("Gone, Gone, Gone")

Eric, Pam and Tara are forced to flee Fangtasia and show up at Ginger's house. Eric implies that he and Ginger will have sex once she invites him in but after she does, she sees Pam, Tara and Willa and disappointedly invites them in too. Eric then states that, as promised, he will one day have sex with Ginger (it is not revealed to the audience when Eric originally made that promise). Ginger shows Pam and Tara to the underground cubby she

has in her house whilst Eric and Willa sleep in the coffin she also has in her house. When Governor Truman Burrell calls Eric's phone. Ginger answers which allows the Governor to begin tracing their location. She wakes up Eric and hands him the phone before going into the living room with Ginger and Pam. When they return to the coffin room, they realise that Tara has kidnapped Willa and Pam rushes out of the window after her Progeny. Eric glamours Ginger and tells her to stall the Governor for as long as she can via his phone and then, when Burrell's men arrive, Ginger is to forget ever seeing them that night. He wishes Ginger goodnight before speeding out of the window himself. ("You're No Good")

Ginger is still on the phone with Governor Burrell who is growing impatient with her. She insists that Eric is busy untying Willa but Truman doesn't believe her. Just then smoke comes from underneath the doors and Burrell tells Ginger that the gas includes silver nitrate and states that her Vampire friends can no longer help her. The Governor's men burst into her house and Ginger screams. They chase her through several rooms of her house as she continues screaming but they eventually capture her. Ginger, naturally, doesn't know where Willa is due to her glamouring and Truman takes pleasure in ordering his men to send Ginger to the "camps". ("At Last")

When Eric almost drains Warlow of his blood, he speeds back to the Governor's camp and releases all of the Vampires inside, telling them to kill all of the humans inside for torturing them. On the way to rescue Pam, Tara, Willa and Jessica, Eric hears a scream. He states to Jason "I know that scream" before handing Jason their hostage psychiatrist and rushing off. He opens the door to find Ginger and a group of captured humans who are, supposedly, Vampire sympathizers. He greets Ginger who calls him her "knight in shining armor" and accompanies him, Jason and the doctor. She and Jason watch safely from behind the glass as Steve Newlin meets the sun and she screams again. She is with the group of Vampires as they revel in the sun and helps them when they begin to destroy the boxes of tainted Tru Blood. When Jessica announces that there will be a party at hers and Bill's, Ginger happily announces that she will feed all of the Vampires. ("Life Matters")

Throughout most of the series Ginger is seen sporting a revolver pistol, though she is not very skilled with it, as seen when she accidentally shoots Lafayette Reynolds and begins to panic. When Sookie was investigating who stole money from Eric Northman, she read Ginger's mind and Ginger threatened (in her mind) that she would jump Sookie, if she blamed her. She has been shown to be capable of stabbing with a knife.

Ginger: (pointing a gun at Lafayette) Who the fuck are you? Lafayette Reynolds: It's daytime! Thank you, Jesus! Thank you, God! You're human, right? Ginger: Kinda! But I ain't lettin' you go, if that's what you're thinking! Ginger: *screams*