"Fresh Blood" is the eleventh episode of Season 3 of the HBO original series True Blood, and the series' thirty-fifth episode overall.

Bill tries to earn back Sookie’s trust, but ends up bringing her face-to-face with fresh dangers. Knowing he’s no physical match for King Russell, Eric tempts Russell with the “ultimate vampire dream.” Jason tries to wrap his head around Crystal’s revelation. Sam embraces his dark side, alienating everyone except Tara. Hoyt and Jessica take their romance to the next level; with Holly’s help, Arlene puts her future in the hands of a goddess; post V-trip, Lafayette struggles with new demons.

"Be brave...
We'll die together."
― Eric Northman, to Russell Edgington

Bill storms into Fangtasia looking for Sookie. Pam tells him she isn't there. He tosses her aside and makes a move for the door. Pam promptly sprays him in the face with liquid silver, thus blinding him. Still mad at Eric, Yvetta goes downstairs and frees Sookie. Upstairs Pam is getting the better of Bill courtesy of the silver spray. Yvetta and Sookie help to secure Pam with a silver chain. Pam tells Sookie she was to be a gift for Russell.

Lafayette and Jesus rehash their V trip. Jesus wants to go back to "see my people" but Lafayette tells him there is no guarantee they will return to the same destination. During the conversation Jesus' face momentarily turns monstrous and lunges at Lafayette. It appears to be a residual hallucination from the V, but Lafayette is uncertain about Jesus and asks him to leave.

Crystal explains to Jason that she is a werepanther. Jason isn't taking it well and this bothers Crystal. He leaves with his shotgun loaded with pointed wooden slugs to look for Sookie.

Jessica and Hoyt are back together. They tell each other how badly they missed one another. When things start getting heavy Jessica tells him about killing the trucker. She explains she's not going to stop drinking human blood and Hoyt immediately offers his own neck. Jessica goes right for it and Hoyt seems to like the experience.

Eric goes to see Russell and explains the reason for killing Talbot. He reminds Russell that he killed his entire family 1,000 years back and Russell simply chuckles. With Russell a moment away from killing him, Eric says he can help Russell in his new ambition. Eric says "I can offer you the sun," explaining he can provide Russell the ability to walk outside. "If I'm wrong, kill me tomorrow," Eric says. At this point Pam calls to tell him Sookie escaped with Bill.

In the car Bill asks Sookie about going to Eric. She isn't sure she can trust either of them and admits to having some feelings for Eric. Bill asks if she wants to start the relationship all over again when the current situation is behind them. Sookie says she does. We see Tara weeping at Eggs' grave.

Holly has a way for Arlene to terminate the pregnancy that isn't 100 percent. It will happen after work. A drunk and belligerent Sam storms into Merlotte's and starts yelling at customers and employees. Terry tries to help Sam who calls him a "shell-shocked MFer." The waitresses want him to leave and he calls them "bitches." Holly and Arlene walk off the job.

Sitting at the Bon Temps High School, Jason can't reach Sookie on the phone. He walks over to the football field and sees Kitch Maynard practicing his throws while a few girls look on. Jason notices Kitch has almost super-human arm strength. A weepy Summer goes to see Mrs. Fortenberry after being rejected by Hoyt. Summer doesn't think there is anything left for her and apologizes for letting Maxine down; Maxine replies, "We are not finished. Not by a long shot."

Tara comes in to Merlotte's to find Sam having to wait his own tables. She sits down with Sheriff Andy and stares at him while he awkwardly tries to make one-sided conversation. Eventually she tells him about knowing he didn't shoot Eggs. She calls him a bunch of names but indicates she doesn't plan on ratting him out. Andy admits knowing everything was really Maryann's fault and wishes he could have done something different to keep Eggs alive. He says Jason had no idea what Eggs was doing and apologizes to Tara.

Sam asks Tommy to wait tables. This causes an argument during which Tommy compares him to Joe Lee. Sam fires Tommy and tells him to move out. Tommy immediately apologizes and begs to be able to stay with him but Sam is insistent, saying he doesn't care what happens to his brother. Sam then goes into dining room and demands that every customer leave. Tara refuses.

Sookie says while she was in the dungeon she made a commitment to ending the strangeness of their life. The pair tosses around ideas for how they would live a "normal" life. At this exact moment their car is stopped by Eric and Russell who are standing in the middle of the road.

Out in the woods Holly performs a ritual with Arlene. Holly gives Arlene directions for a tea she should drink. Arlene looks to the sky and apologizes to her dead mother, Delilah Holden for what she is doing to her unborn child, "I don't believe in abortion, but I'm doing what has to be done." Holly hands Arlene a glass, adding a drop of Arlene's blood before she drinks it. Holly reminds her that if the "spirit is meant to be born, it will be born." Arlene will have to drink the concoction several times a day for the next five days.

Jason approaches Kitch at the football field and accuses him of being on V, an illegal substance, to enhance his playing performance. Jason threatens to tell his coach, parents, and the principal. To which Kitch responds that all parties are very much aware and there is no test for V. Jason is upset that during his career he played clean. Kitch is about to get a scholarship from LSU and vows to break every one of Jason's records.

Lafayette hears voices. He walks into the front room to find all of his religious figurines talking to him.

Russell and Eric take Bill and Sookie to Fangtasia. Eric tells Bill to fight back, as they battle Russell enters Fangtasia. While alone Eric confides to Bill that he has a plan.

Cut to Tommy appearing to break into Sam's safe in his bar office.

Terry wakes up Arlene from a deep sleep to point out a mass of blood between her legs. She tells him, "I'm sorry, I think we're losing the baby" and Terry starts to cry. She has him take her to the Bon Temps Hospital.

Jason returns home to Crystal and tells her he doesn't want to break-up. He says he loves her and that he doesn't think turning into a werepanther is so bad. She wants them to go to Hotshot and stop the DEA raid in the hopes of saving the kids.

Inside Fangtasia Russell isn't buying Eric's story that Sookie is a faerie. Eric says she is part-fairy, perhaps the last of her kind and Russell's only chance to walk in the sun. Sookie says this is ridiculous and Bill suddenly starts backing Eric's story and says if Russell develops a taste for her blood it could be her only chance to live. Russell wants Eric to go first. "Love to," Eric says.

At the Bon Temps Hospital Arlene tells Terry, "it just wasn't mean to be." Terry weeps as Dr. Robideaux walks into the room and tells them the baby is fine. Arlene is stunned.

The sun has come up and Pam takes Eric aside and tells him she's worried it won't work. Bill points out to Eric and Russell that if they drain her completely they will be out of fairy blood. Sookie is unimpressed, "If this is you trying to help me, thanks for nothing." Russell and Eric drink from Sookie while she screams. Eric walks outside into the sun and is fine. He seems stunned. Russell and Pam watch this from the security camera.

Eric motions for them to come outside as small wisps of smoke come from his skin. He tells himself: "Don't let them see." Bill demands to be let free so he can feed Sookie. Russell walks outside and is overjoyed. He turns to Eric and sees that his face is now blistering. Eric handcuffs his arm to Russell's with silver manacles, and the two begin to burn, his plan is to meet the sun with him. 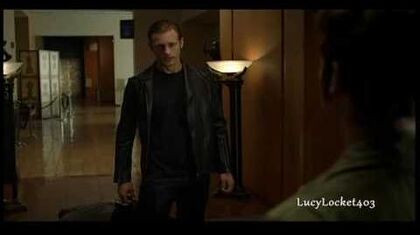 Sam Merlotte: (to a Merlotte's customer) "Jesus Christ you're ugly!"