"Frenzy" is the eleventh episode of Season 2 of the HBO original series True Blood, and the series' twenty-third episode overall.

With the crisis in Bon Temps careening out of control, Bill seeks out the advice of Sophie-Anne, the Vampire Queen of Louisiana, but must exercise patience before she gives him critical information. Meanwhile, Sookie and Lafayette find that protecting Tara from herself is more difficult than they anticipated; a desperate Sam turns to an unlikely source for assistance; and Hoyt’s allegiance to Maxine is put to the test by Jessica.

"I haven't enjoyed sex with men
since the Eisenhower administration."
― Sophie-Anne Leclerq

Bill walks into the Vampire Queen of Louisiana, Sophie-Anne's, mansion to find her, feeding from the femoral artery of a young girl. Bill asks her advice on how to defeat Maryann and Sophie-Anne makes Bill reluctantly spend the entire day lounging with her inside her day room before she will tell him what she knows.

Hoyt takes his mother Maxine away from Jessica after seeing her more violent side, and says he should have listened to Bill’s warnings about her. Tara proves difficult for Sookie, Lafayette and Lettie Mae to handle, as she insists on going after Eggs. Tara manages to convince her mother that God wants her to let her go and Lettie Mae holds Sookie and Lafayette at gunpoint while Tara makes her getaway.

Sam finds Coby and Lisa Fowler – Arlene’s young children – wandering around the woods hiding from their mother and the rest of the townspeople. Sam takes them in and feeds them. While they eat the children suggest Sam seek out a vampire to find out how to return their mother to normal. Jason and Andy, meanwhile, decide to take action against Maryann and, ignoring Sam’s advice that Maryann cannot be stopped with violence, they go to the Bon Temps Police Station to arm themselves.

Sookie and Lafayette manage to liberate themselves from Lettie Mae and go after Tara. Tara goes to Sookie’s house and find Eggs in the kitchen but is unable to get him out before Maryann shows up. Soon Tara is once again under her influence. Sam takes the kids to Fangtasia and asks Eric for help.

The Viking vampire agrees to ask Sophie-Anne’s advice about stopping Maryann. The townspeople tell Maryann that the god came and smote Sam, but Maryann deduces that the mob has been tricked by Sam’s shape-shifting and angrily orders them out with a high pitched sound that emanates from her.

Hoyt tries to deal with Maxine on his own, but she continues to insult him and even reveals that his father killed himself because he was weak. She says that he was not shot by burglars as Hoyt believed. Sookie and Lafayette arrive at Sookie's house and, while Lafayette distracts Terry and Arlene with drugs, Sookie sneaks inside. After a brief and disturbing encounter with Mike, she makes her way upstairs. Lafayette runs into Maryann and Karl. Lafayette shoots at Maryann but she blocks the shot with her hand with ease, and the bullet ricochets off her hand into Karl's head, killing him.

Sophie-Anne, Bill and two human companions are playing Yahtzee. Bill gets up to leave when Sophie-Anne finally reveals to Bill that Maryann is waiting for her god to come and bring her “true death” and that Maryann can be killed only after she thinks her god has come for her. When she steps aside to talk to a guard, Bill speaks to the female girl, and we learn her name is Hadley Hale, and she is Sookie's cousin. Bill departs for Bon Temps, running into Eric on the way out. He threatens to reveal to Sophie-Anne that Eric is making Lafayette sell vampire blood "V" unless he stays away from Sookie.

Jason and Andy put aside their differences to defeat Maryann and Bill shows up at Sam’s place.

Sookie finds Tara and Eggs in her Gran’s room, building a large nest on the bed in which sits a large, unhatched egg. Sookie screams for help as Lafayette, now also under Maryann's influence, advances on her. 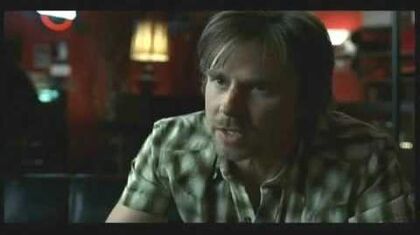 Arlene Fowler: "The fine will be one hundred million dollars... and your pants."

Sophie-Anne Leclerq: "Well, it seems like your friend Mr. Northman is here."
Bill Compton: "Now it's definitely time for me to go."


Sophie-Anne Leclerq: "Maenads are sad, silly things... The world changed centuries ago and they're still waiting for the God Who Comes."
Bill Compton: "Does He ever come?"
Sophie-Anne Leclerq: "Of course not. Gods never actually show up. They only exist in humans' minds, like money and morality."

Bill Compton: "Is this a bad time?"
Sophie-Anne Leclerq: "Ahh! haha! a bad time? There's no such thing as bad or time for that matter. Wanna join me?"