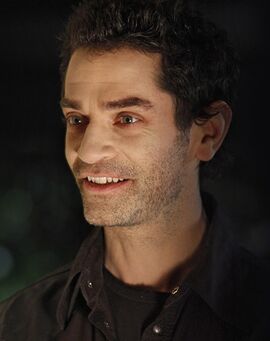 "Shut up! Shut up! Oh, your heart is beating so fast. I want to feel it stop!"
―Franklin Mott[src]

Franklin Mott was a vampire on the HBO original series True Blood. Played by British co-starring actor James Frain, Franklin makes his debut on the episode "Beautifully Broken" in the series' third season. Coming to Bon Temps, Louisiana working undercover, he becomes fascinated with Tara Thornton and kidnaps her. Serving as secondary antagonist through the series' third season, Franklin was a recurring character through the same season and met an untimely demise in the Season 3 episode "Everything Is Broken".

Originating from London, England, Franklin is the vampire that is reliable to have a job done. His price is high, but his skills are more than worth it. Officially a 'private eye', he also specializes in kidnapping. He has no qualms about killing members of any species, be it vampire, werewolf, human or fairy. However, whoever hires Franklin might mean they may end up paying a little more than they bargained for: Franklin has a terrible weakness for women and an even worse track record with them. Franklin often leaves behind a mess and it's more often than not an awfully big mess. Franklin doesn't hold much regard for the vampire hierarchy. He's loyal only to his employer, and even that only extends so far. He has no respect for Kings, Queens, or the American Vampire League. Besides, no one dares to report Franklin's misdeeds. His psychosis is unstable at the best of times, particularly when it comes to women. He can get insanely jealous and has little regard for the rights or feelings of the women unlucky enough to become involved with him.  Although a mercenary for hire, Franklin is disliked by so many that he works almost exclusively for Russell Edgington, the vampire king of Mississippi.

Franklin was made a vampire in 1954. He was the son of a successful surgeon and a brother to one of the most noted Ibsen scholars in the world. Franklin, on the other hand, was always behind the eight-ball, emotionally and intellectually, and he struggled with being an underachiever in a family of noted scientists and scholars. Throughout most of his adolescence, he was clueless, socially and scholastically, and felt he was a failure. He left home at 16, determined to make his mark on the world. He started his own private investigating business, focused on developing his skills and abilities to be as thorough as possible in his cases. Franklin accepted the gift of vampirism, convinced the years of experience would make up for his shortcomings as a human being, and he succeeded. Russell snatched him up as soon as he got wind of his skills. But while years of hard work helped him develop his abilities as a P.I., no time in the world could make Franklin understand how to carry on a romantic relationship with any degree of aplomb.

Franklin is first seen while breaking into Bill's house and going through his office, after finding a secret compartment he pulls out a folder containing information about Sookie including her family tree, an article about her winning a competition when she was young with vivid pictures of her. ("Beautifully Broken")

Later he goes to Merlotte's Bar and Grill and begins to talk to Tara, then orders a Tru Blood. When Tara attacks two rednecks, Franklin comes to her aide and holds one of them while she beats him. Getting turned on, his fangs pop out. ("It Hurts Me Too")

Later that night, he and Tara visit the Bon Temps motel and make love until sunrise. He reveals his name to Tara while Tara hesitates to give hers and leaves abruptly. ("9 Crimes")

The next night he visited Jessica at the Compton house. There he found out Tara's name and address and Franklin visited and glamoured Tara later. He uses Tara to get more information about Sookie. ("Trouble")

He then kidnaps Tara and takes her with him to Russell Edgington's mansion. There he expresses his desire to make Tara his vampire bride. One night Tara convinces him to untie her and let her drink his blood. In the morning Tara leaves the bed and using a mace from the bedroom wall, she attempts to destroy him by crushing his head in a frenzy of blows.

It isn't too long, however, before the crazed vampire makes another appearance. After a fight between Sam and Crystal Norris' father, Calvin Norris takes place in Merlotte's, Franklin comes to Tara and pulls her into a dark corner around the bar. Out of sight from anyone else, Franklin pins her to the wall and begins to probe Tara for answers. Why did she try to kill him? He explains that 'others' had informed him of this, and that she did not love him, but when Tara admits the truth of these words, Franklin begins to break down. ("I Got a Right to Sing the Blues")

Franklin can't bring himself to understand why and even when Tara stands up for herself, openly inviting the vampire to kill her, he can't even bite her. ("Night on the Sun")

Jason breaks the tension by appearing with a loaded shotgun and threatens Franklin who in return, mocks the use of Jason's gun and claims that he could 'unload every bullet' into him but it would never be enough, not knowing that Jason had pre-loaded the gun with wooden bullets originally given to him by the Fellowship of the Sun. Jason then shoots Franklin who undergoes the true death and explodes into a grotesque wave of blood and guts. Tara insists that they hide Franklin's remains. To show her hatred for her tormentor, she even goes so far as to desecrate the goo before burying it. ("Everything Is Broken")

Male, 25-mid 40’s and sexy, sexy, sexy, sexy. This tall, dark and handsome vampire seems to have an immediate and torrid connection to Tara, whom he meets in the local bar. He later rushes to Tara’s aid when she faces down a couple of racist rednecks…VERY STRONG RECURRING THIS ROLE FIRST APPEARS IN EPISODE 3.02