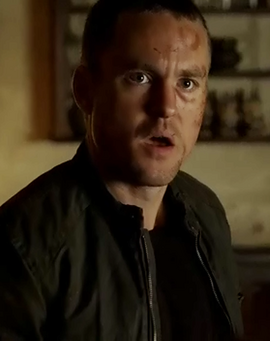 "Fuck me? 'Cause I bet you my shotgun, to your no arms and legs, you're the one's about to get fucked here!"
―Felton Norris, to Jason Stackhouse[src]

Felton Norris was a werepanther on the HBO original series True Blood. Played by American guest starring actor James Harvey Ward, Felton makes his debut on the episode "9 Crimes" in the series' third season. Living in the small town of Hotshot, Louisiana, he was the half-brother of Crystal Norris, related to her through their common father Calvin. Calvin had promised Crystal to Felton since she was four years old, so that the two of them could breed and keep the werepanther bloodline going. Playing a recurring role through the series' third and fourth seasons, Felton meets an untimely demise in the Season 4 episode "I'm Alive and on Fire".

Felton became frustrated over his fiancée's infatuation with Jason Stackhouse, a human. His addiction to V eventually led him into madness: not only did he shoot his father dead, but also did he abduct Crystal in an attempt to make her his wife still. Crystal did not get pregnant, however, and Felton agreed that she and him should turn Jason into a panther, so that he could make some new babies. Jason escaped the panther's clutches and killed Felton.

Felton is a werepanther living in the small town of Hotshot, Louisiana.

Felton is first introduced when Lafayette Reynolds goes to Hotshot to find buyers for the "V" he must sell. Calvin is not interested in V and does not want to talk with someone like Lafayette. Felton and his men prepare to jump Lafayette and steal his new car. Eric comes to Lafayette's rescue and forces the men to take the V deal. ("9 Crimes")

"I Got a Right to Sing the Blues"Edit

The next day, Felton and two of his friends find Lafayette's house & smash his car. Lafayette and Jesus Velasquez scare them off. In the morning, Jason Stackhouse comes to Felton and Crystal's house with flowers for Crystal. She tells him that she and Felton are engaged. ("I Got a Right to Sing the Blues")

A few days later, Felton and Calvin enter Merlotte's in search of Crystal, after she runs away from her family. The two seem aware that Sam and Tommy are shifters, and the Merlotte brothers can smell that something is odd about the meth dealers. Sam kicks them out of the bar. ("Night on the Sun")

The next night, Felton tracks Crystal to Jason's house. When Jason arrives, Crystal accuses him of rape to distract Felton. While Felton attacks Jason, Crystal knocks him out. The two tie him to a tree then call the police and leave. In the morning Jason and Crystal hear that Felton escaped and severely beat deputy Kevin Ellis, who answered the distress call. ("Everything Is Broken")

He kidnaps Jason, locking him in a freezer. ("She's Not There")

While Jason is tied to a bed in Hot Shot, Felton surprises him by returning. He walks toward Jason with a shotgun. Crystal appears with him.

Andy Bellefleur goes to Hotshot. At first it seems like a legit police visit, but Felton realizes almost immediately that Andy is looking for V. Jason hears Andy's voice and starts to make noises, but Andy doesn't hear him.

Felton commands Luther to take a vial of V to Andy. Andy takes the V as "evidence" and quickly leaves. ("You Smell Like Dinner")

Felton's and Crystal's plan is revealed to be to turn Jason into a werepanther and use him to breed more cubs (since the male population of Hotshot has become sterile over time). ("If You Love Me, Why Am I Dyin'?")

"I'm Alive and on Fire"Edit

Shortly after Crystal rapes Jason, he escapes and is chased by Felton. As Jason hangs on a tree branch, Felton appears below having tracked his scent. Felton, who was unaware of Jason above him, stood confused under the branch. Jason jumps out of the tree and uses a sharpened stick to kill Felton by stabbing him in the neck. Felton shifts back to human and dies in seconds. ("I'm Alive and on Fire")

Technically being a shapeshifter restricted to one form, Felton was stronger than the average human and multi-form shifter, but weaker than a vampire. He had the ability to shift into panther form without any difficulty, but it is possible his inbred heritage decreased his latent potential. It did, however, cause infertility in him.

Retrieved from "https://trueblood.fandom.com/wiki/Felton_Norris?oldid=143710"
Community content is available under CC-BY-SA unless otherwise noted.