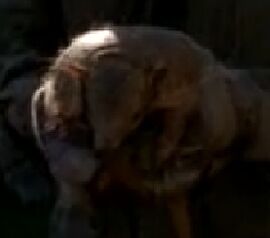 Felix is the name given to Terry Bellefleur's pet armadillo on the HBO original series True Blood.

Felix is a standard armadillo, giving him the standard classification given to armadillos today.

Felix was a baby armadillo when Terry Bellefleur found him abandoned on the side of the road.

Felix is first mentioned by Terry when he tells Arlene his 10 reasons she can trust him with her kids. He claims, he found Felix as a baby by the side of the road and nursed him. He still sleeps under Terry's bed. ("It Hurts Me Too")

Terry is seen holding Felix after his house burned down. ("I Wish I Was the Moon")