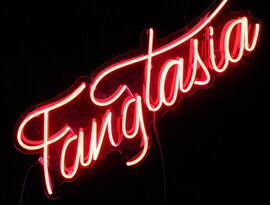 Fangtasia is a popular vampire bar on the HBO original series True Blood. Located in the town of Shreveport, Louisiana, Fangtasia is owned by vampires Eric Northman, Chow Lin, and, in part, by Eric's progeny, Pamela Swynford de Beaufort. It was presumably opened after the Great Revelation and serves as a hangout for vampires and "fangbangers".

Fangtasia is a big open plan bar with many tables and a few small stages for vampire dancers. Its bar is fully stocked (and by Pam's own admission, is overpriced) in order to cater to its human clientele. Due to Eric's status among vampires as Sheriff of Area 5, he has a throne-like seat near the back of the bar where humans may offer themselves to him.

Fangtasia is a hot bed for humans looking to have sex with vampires; known patrons include Maudette Pickens, Dawn Green, and Neil Jones.

It is during a police raid on Fangtasia that Eric became aware of Sookie's ability to read human minds, and he was intrigued. ("Escape from Dragon House")

Eric called Sookie and Bill back to Fangtasia in order to discover who stole $60,000 from his business. When Sookie happened upon a glamoured Ginger, it was clear that the vampire Longshadow, business partner with Eric and Pam, was responsible for stealing the money.

Just as Longshadow attempted to kill and silence Sookie, Bill staked him through the heart. ("The Fourth Man in the Fire") ("Plaisir D'Amour")

After it was discovered he was selling V, Lafayette Reynolds was imprisoned for nearly three weeks in Fangtasia's basement.

Also imprisoned was Royce Williams under suspicion of starting the fire which killed the vampires Malcolm, Diane, and Liam. When Eric came to question him however, Royce attempted escape with a silver cross in hand.

This resulted in Royce's immediate, bloody death by a hungry Eric. ("Nothing but the Blood") Lafayette, using the metal hip in Royce's remains, broke free only to get shot by Ginger in the main bar area above and subsequently fed on by Eric, Pam, and Chow. ("Keep This Party Going") Soon after, however, Sookie agrees to help Eric find Godric, one condition being that Lafayette is released. ("Scratches")

Eric and Pam hire a new dancer named Yvetta. The club is also raided by the men of the Magister who discover the "V" that Eric and Pam were selling for Sophie-Anne. Pam is taken into custody by the Magister and when Eric arrives he is given three days to bring Bill, who Pam claimed was the one that sold the "V", in front of him or Pam would be killed. ("9 Crimes")

After Eric kills Talbot Angelis, Nan Flanagan comes to Fangtasia and interrogates Eric. Both Eric and Pam are put under house arrest by the American Vampire League. ("Everything Is Broken")

There are various back rooms in Fangtasia, including an office for Eric, coffins for the owners and a powder room for vampire dancers.

Below the club is a dungeon-like basement in which Eric keeps humans who have in some way wronged the Area 5 vampire community, as is his duty as sheriff. Lafayette Reynolds was one person imprisoned there after being kidnapped as punishment for dealing "V". 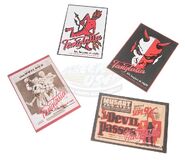 The Fangtasia scenes are filmed at "Alex's Bar", a punk rock dive at 2913 E. Anaheim St. in Long Beach, Ca. It is near the northeast corner of Anaheim Street and Gladys Ave. about 2 miles east of downtown Long Beach. On the show, you are looking at the rear entrance.