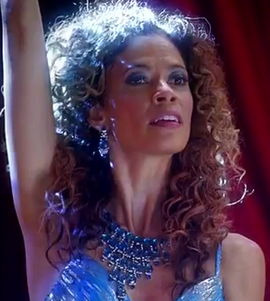 "As long as we faeries control our light, we will be free."
―The Faerie Elder, to Sookie Stackhouse[src]

The Faerie Elder was an ancient and powerful faerie on the HBO original series True Blood. Played by American guest starring actress, Erica Gimpel, the Faerie Elder is said to have been through many realms, spoken many languages and taken many forms rendering her with an inability to focus at times. It is said that she operates on many frequencies at once and that time has no real meaning to her. The Faerie Elder meets an untimely demise during her only appearance, on the episode "Sunset" in the series' fifth season.

Sookie turns to the elder seeking advice and guidance on how to deal with Warlow and the fairy contract binding her to him. The Elder tells Sookie that the destinies of Sookie, Warlow and herself are intertwined. Before she can tell Sookie anymore about Warlow, they are interrupted by Jason, who tells them that Russell Edgington is alive. The Faerie Elder is mortified when she hears of this, and later passionately urges the fairies to allow Sookie to lead them into battle against Russell.

Sookie, Jason and the rest of the faeries formulate a plan to lure Russell to the nightclub, which ultimately works. The Elder then deviates and attempts to destroy Russell and Steve Newlin herself, but the plan backfires when Russell gets the jump on her and drains her of her blood, killing her. ("Sunset")

Being a faerie, she has a vast array of fae magic, including photokinesis, and telepathy. Due to her extreme age, she is much more powerful than other younger faeries. Using her photokinesis, she was easily able to throw Steve Newlin back at least a hundred feet and knock him unconscious. Russell then makes the comment that she "must be turbocharged." The elder also possesses the ability or knowledge to open portals and banish individuals to other realms, as she was in the process of trying to banish Russell from the mortal realm when she was defeated.

Retrieved from "https://trueblood.fandom.com/wiki/Faerie_Elder?oldid=143079"
Community content is available under CC-BY-SA unless otherwise noted.