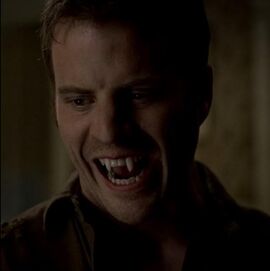 "Suppose at one point a vampire was able to turn a fae into their own kind. I never imagined such a mongrel could exist but if it did, I suppose they might have both powers, faerie and vampire."
―Niall Brigant to Jason Stackhouse[src]

Faerie-vampires are faeries that have been turned into vampires on the HBO original series True Blood. For centuries it was thought such a combination could not exist and the main reason is that vampires find faerie blood so delicious that they would be unable to stop themselves from killing the faerie before they could complete the turning. Fittingly, the only faerie-vampire, Warlow, was created by Lilith herself.

Warlow, as indicated in the Book of the Vampyr, is one of the progeny of Lilith. He caused his maker's downfall thousands of years ago and has been active in some form even in the common Era. His name is known to those who have studied the Book of Lilith, but he remains a mysterious figure. ("Who Are You, Really?")

Since Warlow, the feat of creating another vampire-faerie does not appear to have been replicated. It is likely not even considered, given how few vampires know about faeries in modern times. Since other supernatural creatures like weres and maenads cannot be turned, it was probably thought that faeries couldn't be either. Warlow himself was only found out due to a relatively random series of events. ("F**k the Pain Away")

Faerie-Vampires are indistinguishable from normal Faeries and appear as they did when they were turned. Their minds can still be read by faeries and halflings. Like vampires, they have fangs that extend and retract willingly, though they can be stimulated to extend unwillingly. Since Warlow came into physical contact with Sookie and Niall without arousing suspicion, it also seems that vampire-faeries have functional circulatory systems and are warm to the touch like faeries. Faerie-vampires can subsist on mortal food like faeries, or on blood like vampires. ("You're No Good")

Though they appear human, the true form of a faerie-vampire is like a goblin. ("Radioactive")

Psychologically it seems Faerie-vampires are unable to control themselves once the sun sets, Warlow who is over 5,500 years old and should have better control over his bloodlust is unable to stop himself from attacking once night falls. This may be because Vampires are natural predators of Faeries and thus a Hybrid would be slightly unbalanced due to the conflicting essences. Vampires are creatures of darkness, while Faeries are creatures of light. It's possible that Warlow couldn't control his thirst because his maker Lilith never taught him how, just like vampires. ("Don't You Feel Me")

This variable lack of control is specifically driven by the thirst for blood it seems, as Warlow only demonstrated uncontrollable urges at night-time whenever he was hungry. Warlow was able to drain Niall Brigant (a faerie elder who should be completely irresistible to any vampire) without consuming his blood, thereby confirming that he does have some level of control, though it is unknown if Faerie-Vampires are as tempted as normal vampires considering the fae blood they still have within them. The amount of control varies according to hunger, which is the norm for most vampires irrespective of their age, however, Godric once stated that at his age, he doesn't require much blood anymore meaning by this logic and at 5,500 years of age, Warlow should not require much blood yet if anything shows much more of appetite for blood.

Faerie-vampires possess mostly the same weaknesses as their vampire counterparts with the exception of sunlight.