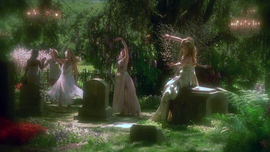 Faeries are one of the most powerful supernatural creatures on the HBO original series True Blood. First introduced in the series' third season, faeries are a species of humanoid creature once native to Earth, but who now primarily exist on the Dimensional plane of Faerie.

After being drained to the point of death by a starving vampire Bill Compton, Sookie is taken to hospital where her dreams are infiltrated by a large group of Faeries, the most prominent of these being Claudine. The fairies appear deeply attractive and enticing to Sookie, portraying stereotypical faerie traits such as a love for nature, pleasure and dancing. The drinks they give Sookie in her dreams "taste like happiness" and they appear to be able to communicate telepathically with Sookie. The faeries all emerge from a pond which seems to be some form of portal into and out of Sookie's dreamscape. As Bill approaches the hospital and Sookie's bed, the fairies grow fearful and ask Sookie to come with them as the vampire will steal her light. Sookie refuses to go with them and so they abandon her dreams. Bill then revives Sookie with his blood.

Due to Sookie and Bill's numerous blood transfusions as a couple, Bill is able to unknowingly enter the fairies' realm. Whilst there, he interacts with Claudine but she immediately runs away from him. Bill catches up but is suddenly enticed by her blood. Claudine uses a form of photokinetic magic to push Bill away from her. Bill later wakes up and tells Sookie that Claudine explained to him that Sookie is part fairy. He tells Sookie that fairies are capable of breeding with humans and are known to abduct humans, likening them to aliens.

Sookie is led into Faerie by her fairy godmother Claudine. Barry is also there with his fairy godfather. They are offered a glowing light fruit which they call Lumiere fruit. Sookie quickly deduces something is off about the way everyone around her is reacting to the taste. Sookie then sees her deceased grandfather Earl Stackhouse. After Sookie speaks with her grandfather he claims that he's only been in the fairy realm for about a few hours, but Sookie informs him he's been gone for almost 20 years. Sookie happens to catch a glimpse of one of the fairie's true form (which is almost green and goblin like) and senses things are very off, which she telepathically communes to Earl. But it seems in the fae realm Telepathic thoughts can be heard by all; suddenly everyone looks at the two. Queen Mab then tells Sookie it's her world that's the trap, that the fae will no longer breed that now it is time to harvest, which the Lumiere fruit seem to do. Queen Mab tries to force Sookie to eat one, causing Sookie to use her Photokinesis, blasting the Queen away. Suddenly the Queen, as well as everyone else and the environment, go from beautiful to shockingly different. All the fairies turn gray and goblin-like and the beautiful gardens and the lovely purple/pink pastel skies turn barren and gray. The beautiful Lumiere Tree- which seemed to be the source of the beautiful illusions and time-loss- becomes nothing more than an ugly, gnarled tree, virtually lifeless.

Sookie and Earl then run away from the crowd of dispersing fairies and Queen Mab along with other fairies begin to chase them, throwing what seems to be explosive photokinetic balls. Suddenly two male fairies grab Sookie and Earl and tell them they can help. One of the male fairies is hit by an energy ball and incinerates to dust instantly. The other male fairy informs his band of renegade fae that he has the humans and to hold Queen Mab and the other incoming fairies. While Earl, Sookie and Claude escape, they eventually reach a cliff that leads into a gaping, seemingly bottomless hole. The fairy informs Sookie and Earl that the hole is in fact a portal back to earth and tells them to jump, but Sookie is wary of jumping. Queen Mab comes and begins to close the portal. Because Earl ate the light fruit and Sookie didn't, Earl wouldn't be able to make it. As the portal was getting smaller, Sookie and Earl jump. They are suddenly in the graveyard of Bon Temps. While Sookie is unscathed, Earl is doubled over, decaying. Eventually Earl turns to dust, not before giving Sookie his watch and saying his last goodbyes. Later Sookie discovers she had been gone for 12 and a half months, but it seems that her misadventure had only lasted 15-20 minutes tops. ("She's Not There")

Later, Claudine arrives on Sookie’s porch and asks that Sookie come with her back to Faery but Sookie responds with a no. In a flash, Eric Northman captures Claudine and begins to feed from her. He kills her, reverting her to her true form which seems to be losing its light, thus bursting into a pile of fairy dust. ("If You Love Me, Why Am I Dyin'?")

The fairy Maurella appears to Andy Bellefleur in the woods outside of Bon Temps. She is highly attracted to Andy. After gaining his trust and even having her light transfer into his hand, the two make love.

It is revealed that some of the fairies escaped the Realm of Faerie as Claude goes to a boutique to buy clothing for his sisters, when Jessica smells him, saying he smells wonderful and gives chase, but she loses him in the middle of a field.

Judge Clements, Andy, and Jason get into a limousine with three beautiful women Delilah, Angelica, and Lilianne. As they sit, bags are placed over their heads. Jason and Andy grow paranoid, but Judge Clements assures them that it's okay and seems to be enjoying it. One of the girls tells the chauffeur to drive.

Andy, Jason and Judge Clements are still wearing bags over their heads as they are walked into a field by the girls. Their escorts open a portal to the fairy world and take the three men inside. The bags are removed so that they can take in the nightclub setting. Judge Clements leaves with one girl and Jason hooks up with another, Leda. Andy is recognized by Maurella. He wonders if he was dreaming their first night together and she assures him that he wasn't. He asks if this is a dream. She kisses him and asks what he thinks. Andy says he doesn't care and walks away with her.

Jason is making out with Leda in the fairy nightclub. She stops and says that he's thinking about someone else - a vampire. Jason wonders how she read his mind and asks where he is. He is surprised to see his cousin, Hadley, when she calls his attention. They happily greet one another. Jason tells her that Sookie is alive and asks Hadley if Sookie knows that she's at the club. Hadley asks if Jason is a refugee from vampires. He says no, then deduces that he's in a fairy refuge from vampires. Hadley says that Sookie needs to be there with them. Jason disagrees, noting that Sookie suffered the last time she got mixed up with fairies. Jason believes that she is better off staying with vampires. Hadley says that they should get Sookie to safety before she is killed by vampires, just like Jason and Sookie's parents were. Leda is angry with Hadley for speaking out of turn. Jason says that his parents were killed in a flood, but starts to wonder if what he was told is true. Hadley mutters that she's said too much and leaves. Jason tries to catch up to her, but other Faeries separate them. Andy intervenes and tries to help Jason. They are thrown out of the fairy safehouse. They look around and realize that they are in the middle of a field. Andy notices two male fairies appear in front of them. Andy and Jason scream as they are hit with beams of light projected by both fairies.

Jason takes Sookie to the field where the faerie club manifested, and at first she doesn't see anything. Then she senses it, and hears it and walks into what seems to be apparent nothingness. Jason can't follow her at first, but then she drags him in. Inside Sookie finds Hadley and Claudine's brother Claude as well.

As Jason and Sookie are talking to Claude, at the faerie club, Sookie asks if it's true that vampires killed her mother and father. Claude says that he only knows what Claudine told him: An unknown vampire ambushed their parents because he was drawn to something he smelled in the back seat of their car. In a flashback, we see Sookie's parents in their car stopping on a bridge so they don't hit a man standing in the middle of the road. Then we see the man rifling through the backseat and finding a bandage with Sookie's blood on it. Sookie angrily says she doesn't believe him. She tries to manifest her faerie fire but it fails, and a group of faeries in the bar shoot their beams at her as she screams.

Back at the fairy club, Claude and his sister tell Sookie that since she is only half-faerie, her magic is finite. If she isn't careful how she uses it, it will run out and she will no longer be faerie. Sookie seems to be intrigued by this possibility.

Faeries appear as beautiful creatures with pointed ears and glossy thin skin. This is however just an illusion to appeal to the dominant species of their current dimension. In reality they are much less attractive, appearing similar to wood elves or goblins. Faeries are super-humanly strong and durable. They possess longevity but are not outright immortal.

Faeries are extremely attractive to humans as well as to vampires. Vampires have a hard time resisting faeries because of their smell and taste; fairy blood is intoxicating to vampires. This makes face to face interactions between them all but impossible. When a fairy dies a corpse is not left, just a sparkling powder (or fairy dust); the body just disintegrates. Faeries are secretive about their own race, customs, interactions, and world. They normally inhabit the fae world, named Faerie, but there are portals and doorways between it and the human world. Those who have fairy blood in them but are not full-blooded fairies have limited fae powers, while maintaining some of the attractive qualities of fairies. Sookie and Jason seem to have inherited the beauty of the fairies but only certain creatures can tell that they are part-fairy. Sookie appears to have inherited more magical faerie powers (such as immunity against mind spells from vampires and maenads), while Jason only has the power of attraction and seduction. However, most assume this is mainly due to his physical appearance. It is also stated that bloodlines with royalty in it seem to attract vampires (Sookie's life is involved with vampires, while Jason and Jessica are attracted to each other). Faeries love attention and admiration. They also have a habit of frolicking and dancing.

Faerie godmothers and godfathers can sense when their charge is in danger, shown when Claudine magically appeared to aid Sookie when she was in mortal danger on a number of occasions. Sookie was not always aware of her fairy godmother's timely interventions.