Edit
watch 01:21
'True Blood' Profile: Eric and Sookie
Do you like this video?
Play Sound 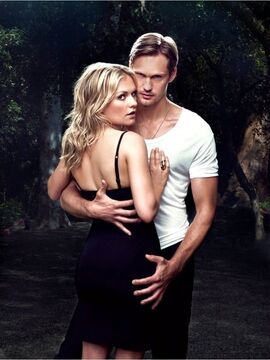 Relationship Information
Status
Shared Blood, Made Love, Lived together, Blood Bonded, Close Friends, Love each other, Kissed, Sookie staked Bill to save Eric, Protective of Each Other, Care about One Another.
First Met
2008
Broke Up
{{{End Date}}}
Species
Vampire and Halfling

"To me, you'll always be that girl in the white dress. The one who walked into my bar."
―Eric Northman, to Sookie Stackhouse[src]

Eric and Sookie, better known as Sooric, is the term referring to the enemy-turned romantic relationship cultivated on the HBO original series True Blood. Sooric is a unique, and popular relationship pairing between vampire Eric Northman and the halfling fae Sookie Stackhouse. They didn't interact too much until Season 2, when Sookie agrees to help Eric find his maker, Godric. As the show progresses, Eric begins to show love and affection towards Sookie, and does everything he can to protect her, even if it means putting her life before his.

Sookie Stackhouse is a waitress who was working for Merlotte's Bar and Grill and Eric Northman was a vampire of Scandinavian origin.

Sookie Stackhouse first met Eric Northman in the Season 1 episode "Escape from Dragon House". Later on in this season, she helps Eric find the man who was robbing his bar.

In Season 2, Eric enlists the help of Sookie to find his maker, Godric. She agrees to help him find Godric.

After finding Godric, Eric helps Sookie escape Steve Newlin, and later tricks Sookie into drinking his blood, establishing an unbreakable bond between them. She is furious with him at first but starts to get close to him.

Eric becomes one of the first vampires to find out about Sookie's faerie abilities. He also becomes more protective of Sookie. Although Sookie continues to choose Bill over Eric, she is still drawn to Eric and starts to have many sexual dreams of him. They share their first kiss in the Season 3 episode "I Smell a Rat". At the end of Season 3, Eric tells Sookie the truth about Bill Compton's original intentions. For her own protection, he decides to always tell Sookie the truth.

In Season 4, after Sookie went missing for a year, Eric bought Sookie's house and renovated it with the hope that she's still alive. He even told Sookie that he never gave up on finding her when everyone else did. When Eric gets his memories taken away by Marnie Stonebrook, Sookie decides to help him by letting him live in her house.

Sookie starts to see a new side of Eric, and soon starts to fall in love with him. They have sex for the first time in the Season 4 episode "I Wish I Was the Moon". When Eric gets his memories back, he tells Sookie that he remembers their relationship and declares his love for her. Sookie admits that she's fallen for him, but that a part of her still loves Bill. At the end of Season 4, Sookie decides to not be with either Bill or Eric, as she loves them both too much.

In Season 5, Eric and Bill come to Sookie for help in finding Russell Edgington. Sookie agrees and they go to an abandoned hospital to seek information and find hostage humans. They are then caught by the Vampire Authority, who instruct Eric and Bill to glamour Sookie and Alcide to forget their involvement. Bill "glamours" Sookie while Eric proceeds to glamour Alcide. He tells Alcide to protect Sookie with his entire life and to not touch her in any way, romantically speaking. Towards the end of the season, Eric convinces Sookie to come save Bill from Lilith.

Sookie agrees and Eric sneaks her, Jason Stackhouse, and Tara Thornton in as prisoners. While Jason successfully slaughters many of the vampire guards in the building, and Tara frees Pam, Eric and Sookie go to find Bill. Sookie tries to persuade Bill not to become "Billith" but he refuses to listen and drinks all of Lilith's blood. Bill suddenly turns into a blood-covered monster, and chases Eric and Sookie as they run for their lives.

Season 6 opens with Eric and Sookie running inside the elevator, but it suddenly appears to break down. Sookie uses her fae light to find a way out of the elevator. Eric rips the elevator's ceiling off and tries to punch it open. They make it out of the building and arrive to the front of the burning building in Eric's car. They pick Jason, Tara, Pam, and Jessica Hamby up as they watch Bill emerge from the ashes of the building. Later on, Sookie takes Jessica to Bill's house, with Eric and Nora Gainesborough behind her.

Bill suddenly slams Eric against the wall pole and nearly chokes him to death before Sookie drives a stake through Bill. Due to Lilith's blood, Bill is able to pull the stake out without being harmed. Eric walks Sookie home, and mentions how she staked Bill to save him. Sookie says that Bill's not the only one that changed and that she's not the same girl she used to be. Eric then tells Sookie, that she'll always be "that girl in the white dress" who walked into his bar. Sookie thanks Eric for walking her home, and Eric decides to return Sookie's house for her own protection. Sookie thanks him and quietly rescinds his invitation to her house, as she wants to have a normal life again. Nora waits outside Sookie's porch and Eric tells her that they won't include Sookie in their plans from now on. Nora remarks that Eric's in love with Sookie and that she may have found his weakness. Eric tells Nora to not "stir this pot" and they both leave.

In Season 7, Eric comes to see Sookie one more time as he is dying from the Hepatitis V virus. Sookie is happy to see Eric and runs up and hugs him, when she sees the dark veins on his chest she is devastated claiming that he can't die on her. As Eric holds Sookie he further tells her about his travels after the events of Season 6, stating that he thought he might see the world "one last time." He wipes away a tear on her cheek. When the group arrives at Fangtasia, as weak as Eric is, he tries his best to help Sookie save her friends from Hep V vampires. After Eric drinks the cure from Sarah Newlin's blood, he comes to see Sookie to let her know that he's alright. Sookie is rejoiced, but informs him that Bill is sick. Eric promises to help Bill. Sookie then sneaks Bill and Jessica into Fangtasia's basement where Eric holds Sarah captive. Sookie tells Bill to drink her blood, but he refuses. Eric holds Sookie as she cries into his chest. Sookie tells Eric to try to convince Bill to take the cure.

Later in the season, Eric meets Sookie outside of Bellefleur's Bar and Grill to talk to her about Bill's decision. He tells her that Bill's made up his mind and that she should let him go. Eric then flies Sookie to her house. She remarks that she's never seen Bon Temps from high above. Sookie invites Eric in, but he says goodnight and turns around to fly home. The next day, members of the Yakuza speed their way to Sookie's house to kill her since she's aware of the cure. Eric kills them before they get to her house. It's implied by cast and crew members that Eric will continue to look after Sookie.