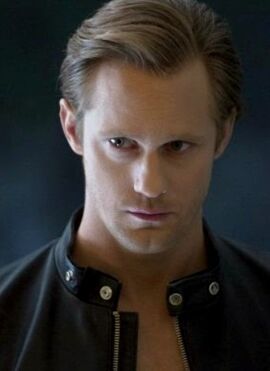 "Everything ends... even the immortals."
―Eric Northman, to Pamela Swynford de Beaufort [src]

Eric Northman is a major character, and vampire, on the HBO original series True Blood. Played by Swedish starring actor Alexander Skarsgård, Eric makes his debut on the episode "Escape from Dragon House" in the series' first season. Born in Sweden in 900AD, during the Viking period, he was turned in 930AD, making him over 1,000 years old. The Vampire sheriff of Louisiana's Area 5, which encompasses the small town of Bon Temps, Eric owns the vampire bar Fangtasia in the neighboring town of Shreveport. Playing a major role through the series' first, second, third, fourth, fifth, sixth, and seventh seasons, he was last seen on the series' finale episode, "Thank You", in the series' seventh, and final, season.

"If I cannot go on, you must make a new vampire. It is your time to be a maker."
―Eric Northman, to Pam as they discuss their future involving Russell Edgington

Eric is shown to be calculating yet loyal and generally willing to absolve humans that aggravate him, unless they have grievously crossed him. His loyalty as Progeny to his Maker Godric was so strong, that he fell to his knees in tears when Godric decided to end his life by meeting the sun ("I Will Rise Up"). Eric demanded to burn beside him and claimed that he could not live without Godric. The only thing that kept Eric from meeting the sun was Godric's last command as Eric's maker, telling Eric not to stay on the roof with him.

Eric has a great capacity for loyalty and affection, considering vampire nature. He demonstrated this with his progeny Pam ("Fresh Blood") and his growing love and affection for Sookie. When he is reunited with his vampire sister Nora, they show great affection for one another. Eric claims he would do anything for Nora.

Being a calm and methodical individual, Eric is mostly in control of his emotions. He rarely loses his temper, but has shown a great capacity for violence when pushed. Eric is unconcerned about being viewed as "the bad guy" merely seeing his actions as a means to an end. He is often secretive and can be somewhat of a trickster, but is honest and direct.

Eric is confident enough to not think he needs to prove himself. He has a joy of living and a sense of humor uncommon for vampires.

After his memory was erased by Marnie, Eric's personality changes entirely. Losing his memory showed the Eric behind the mask. He is gentle and sweet towards Sookie and is even disturbed by the horrible things he has done when he finds out about them. Upon gaining his memory back he claims he isn't just the old or new Eric, he is both.

Eric has the common powers and weaknesses of a vampire. Eric is over 1,000 years old but retains the appearance of a young man. As a vampire, Eric has an infinite lifespan. He does not physically age nor can he die from natural causes such as disease (with the exception of Hepatitis V) or old age. According to Queen Sophie-Anne Leclerq, Eric is the oldest and strongest vampire citizen of Louisiana. He demonstrates his superior strength over her when he forcefully throws her to the floor and threatens to rip-off her head, while all she could do was submit. Eric once kicked a man across Fangtasia without much effort and sent Lafayette to the floor with just a flick of his wrist. He manhandled, overpowered, and tore Royce apart with his bare hands. He easily ripped Roy's heart out of his chest with one hand and has decapitated both humans and younger vampires with only a karate chop. Eric was however, far weaker than his maker Godric who was over 2,000 years at the time of his True Death) or his foes Salome Agrippa (also 2,000 years old at time of True Death), Russell Edgington (almost 3,000 years at the time of his True Death), and Macklyn Warlow (over 5,500 years old).

Eric can move at speeds that make him appear as a blur. This allows him to cover short distances instantaneously and longer distances in short periods of time. Even a gun-fired bullet appears to move in slow motion to him. Eric heals rapidly and fully from any non-fatal injury. He is exempt from all human diseases and illnesses with the exception of Hepatitis D. Eric possesses heightened senses and can see in complete darkness. It is revealed in Season 2 that Eric has the ability to fly, a rare but useful vampire power. Originally assumed to be due to his age, it seems as though this ability might be tied to Godric's bloodline, since the much younger Nora can also fly.

As a maker he had the ability to call and command his progeny, Pam and Willa. He lost these abilities on Pam when he released her.

Like Bill, Eric can day walk permanently, seeing as he drained almost all of Warlow's blood. Now letting him walk in the sun light with no ill-effect. However, once Warlow met the True Death, Eric lost the ability to day walk.

Eric is the fifth-oldest vampire introduced in True Blood behind Warlow, Russell, Godric, and Salome. Due to the others all meeting the True Death as of the final season of the show, Eric is currently the oldest vampire left on the series not taking into consideration other ancient vampires who were never introduced. While he had suffered from Hepatitis V, it was assumed that this title would go over to Violet. Upon Eric receiving the Cure, however, Eric's full recovery meant that Violet no longer stands a chance.