Edit
watch 01:39
Hawkeye Is Here To Amaze - The Loop
Do you like this video?
Play Sound 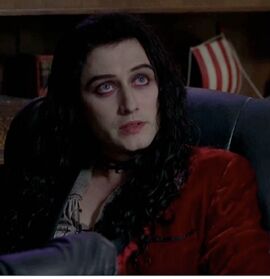 "Everybody, grab a human! Drinks are on me!"
―Elijah Stormer, to the patrons of Fangtasia

Elijah Stormer is a vampire on the HBO original series True Blood. Played by Canadian guest starring actor Keram Malicki-Sánchez, Elijah makes his debut on the episode "Everybody Wants to Rule the World" in the series' fifth season. Replacing Eric Northman as the Sheriff of Louisiana's Area 5, Elijah meets an untimely demise in the subsequent episode, "Gone, Gone, Gone".

Stormer was made vampire by Rosalyn Harris. He was one out of her 204 progeny. Her influence helped him get the job as sheriff of Area 5.

Pam walks into Fangtasia to see Elijah feeding on a human while sitting on Eric's throne. Pam, outraged, quickly runs towards him demanding that he stop feeding on a human while sitting on her maker's chair or she will remove him forcefully. Elijah tells Pam that the Authority has assigned him as the new sheriff of Area 5 and he's now in charge. He throws Pam off the stage and yells out in the club for every vampire to grab and feed on a human, it's on him. ("Everybody Wants to Rule the World")

Elijah is counting the profits from Fangtasia and asks Pam and Tara where the rest of it is. Pam explains that there is no more and there is no other legal way to make money. Elijah tells her of a way to make money that involves a "peep" show where a human pays $20 and then sticks in whatever body part they want and lets the vampire on the other side feed on it. He says it brings in over $2,000 an hour where it is used. Pam refuses and says they like to do things "the old fashioned way." Elijah goes on to explain that there is a mandate to create 30 new vampires in area 5 before the end of the year or he will repossess all of Pam's assets including her money, Fangtasia, and Tara.

Later, Tara calls Elijah to Fangtasia in a frenzy. She says she killed Ginger in an attempt to make her into a vampire. When Elijah checks her, he says she has a pulse. Ginger quickly stabs Elijah with a silver dagger and then Tara beheads him with a sword. ("Gone, Gone, Gone")