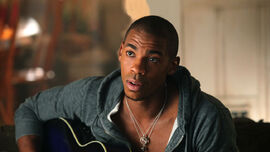 Benedict Talley, more commonly known by his nickname "Eggs", was Tara Thornton's boyfriend of on the HBO original series True Blood. Played by American co-starring actor Mehcad Brooks, Eggs makes his debut on the episode "You'll Be the Death of Me" in the series' first season. The murder weapon of choice of Maenad Maryann Forrester, Eggs was a recurring character through the series' second season, until his untimely demise in the Season 2 episode "Beyond Here Lies Nothin'". He was last seen in a flashback on the episode "Evil is Going On" in the series' third season.

Prior to his "new life" Eggs led a violent and dangerous life, growing up in foster homes and witnessing a man die after a gunfight. He eventually ended up under a bridge after two stints in jail (for drug dealing, drug possession and assault, respectively) and was taken in by Maryann Forrester and her servant Karl. Maryann promised Eggs he would get back on his feet during his stay with her, but in reality she never intended for him to leave her.

Although Eggs was, deep down, not a bad or vicious person, his difficult childhood put him on a path of violence and crime, but he later sought to reform himself. He had an artistic and sensitive side that only those close to him, such as Maryann and Tara, ever saw. He had a strong conscience and felt immense guilt for the harm he had caused under Maryann's influence.

Maryann used Eggs as a weapon, possessing him and controlling him into killing victims of her choice. After Maryann's eventual defeat Eggs understood she had not been benevolent and asked Sookie to help him retrieve his memories. Once he did, he blamed himself for the murders committed by Maryann and tried to turn himself in to Andy Bellefleur. He was shot by Jason who thought Eggs, who was in an erratic and traumatized state, was assaulting Andy. Sadly, Andy was promptly forced to posthumously frame Eggs for Maryann's murderous rampage, seeing as there was no other explanation for Eggs being shot in the head. Andy took responsibility for the shooting.

Eggs' death had great psychological impact on his girlfriend Tara Thornton, who became wrecked after the incident. Eggs was interred in Bon Temps Cemetery, in a funeral paid for by Sookie. When Jason later confessed to Tara that he had killed Eggs, she was devastated. It was some time before she could forgive him.

Retrieved from "https://trueblood.fandom.com/wiki/Eggs_Talley?oldid=141332"
Community content is available under CC-BY-SA unless otherwise noted.