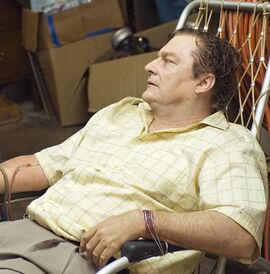 "It's the rare man who knows who he truly is.
At least I accomplished that."
―Eddie Fournier

Edward Fournier, more commonly known as Eddie, was a vampire supplying Lafayette Reynolds with Vampire Blood ("V") on the HBO original series True Blood. Played by American actor Stephen Root, Eddie makes his debut on the episode "The Fourth Man in the Fire" in the series' first season, Eddie is a recurring character who meets an untimely demise in the Season 1 episode "I Don't Wanna Know". Appearing in flashbacks throughout the series' second and third seasons, Eddie was last seen in the Season 3 episode "I Smell a Rat", and mentioned one more time on the episode "She's Not There" in the series' fourth season.

Eddie seems like a lonely man who just wants some affection and company. He seems to be upset about losing his family. Eddie is open about his sexual orientation. He is meek, gentle, and friendly.

Eddie was once a married accountant with a few children. He discovered later during his marriage that he was a latent homosexual, and this resulted in the end of his marriage and the departure of his family. The first time he went to a gay bar, he found that he received little attention but that one vampire who was "even less of a looker" was receiving a great deal of it. After that, he decided to become a vampire himself in order to attract men. It was only a matter of time before he found a vampire willing to turn him, but his maker seemingly left him to his own devices once it was done.

"The Fourth Man in the Fire"[edit | edit source]

Eddie was giving Lafayette Reynolds blood in exchange for sex. He had not yet learned to glamour people as he was a relatively "new" vampire and had not mastered the skill. Judging by this, it is likely he did not have much of a relationship with his maker who would have taught him how to use his powers. His reason for becoming a vampire was to attract men. After becoming a vampire, he continued to live his life as he had before, spending a lot of time alone watching TV. He also believed that Lafayette cared for him even though the V dealer was likely only using him for his blood. ("The Fourth Man in the Fire")

He was later kidnapped by Amy and Jason using a silver hood over his head and Amy's silver jewelry chains as arm & leg restraints. They tied him to a lounge chair in Jason's basement. ("Plaisir D'Amour")

After a few days of taking his blood and talking to Eddie, Jason began to feel bad about what he and Amy had done and decided to free him. Witnessing this, Amy staked the unfortunate vampire before he could be freed, stating that he would have killed them if he had been set loose. Eddie's death had a deep effect on Jason and confused him as to whether vampires were good or bad. ("I Don't Wanna Know")

Eddie is channeled through the witch Marnie Stonebrook. He speaks to Lafayette, mentioning the wine they shared as well as their evenings together. ("She's Not There")

Eddie possessed the common powers and weaknesses of a vampire. Due to his young age, sunlight would slowly kill him. He never exhibited any supernatural ability, and he hadn't yet learned to glamour.

Retrieved from "https://trueblood.fandom.com/wiki/Eddie_Fournier?oldid=145164"
Community content is available under CC-BY-SA unless otherwise noted.