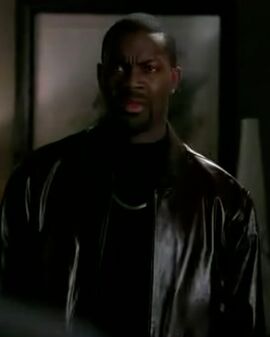 Duprez was a vampire on the HBO original series True Blood. Played by American guest starring actor Damion Poitier, Duprez makes his debut on the episode "Me and the Devil" in the series' fourth season. The vampire sheriff of Louisiana's Area 2, Duprez played a recurring role through the same season, and met an untimely demise in the Season 4 episode "Soul of Fire".

Duprez is from Haiti but moved to the south to live with his aunt in the 1920s. He dropped out of high school to pursue a career as a boxer, but after that fizzled, he found work as an aide to the sheriff of Area one. He was a good and eager assistant and when the time came, he was turned by a willing vampire. He was made sheriff of area two by Nan Flanagan in the 1940s, a post he's held for six decades.

After Eric Northman's disappearance Duprez and his fellow sheriffs Blackburn, Kirsch and Luis Patiño are summoned to Bon Temps, Louisiana by the vampire king of Louisiana, William Compton. At the king's mansion the sheriffs discuss the threat posed by Marnie Stonebrook and her coven. Duprez doesn't take what Bill says seriously, and Bill threatens him. Bill has Luis tell him about Antonia. He doesn't seem to be too knowledgeable on vampire history. The vampires agree to capture and torture Marnie. ("Me and the Devil")

Luis is destroyed and Marnie escapes. The vampires are forced to bind themselves in their coffins with silver chains, to prevent themselves from being forced to meet the sun by Antonia's spell. Blackburn, Kirsch and Duprez order their subjects to evacuate the state of Louisiana. ("Cold Grey Light of Dawn")

Bill and Marnie/Antonia agree to meet in Bon Temps graveyard to negotiate. Duprez was among the reinforcements lurking out of sight until Bill called for them. Antonia casts a spell which surrounds the graveyard with mist. The vampires and witches then attack each other. ("Spellbound")

After the battle, Blackburn, Kirsch and Duprez accompany Bill to the "Festival of Tolerance" in Shreveport, Louisiana. The festival is a charity benefit organized by the American Vampire League. Eric arrives at the Dorchester Hotel where the event is taking place and the sheriffs chase after their former colleague, knowing him to be under a spell. The sheriffs seem to corner Eric but have actually been lead into a trap. Antonia is lying in wait for them and, as she did with Eric, places a spell upon them, bringing them under her control. Antonia then has her new pawns kill Bill's security guards in front of the assembled humans, calling it a demonstration of the true nature of vampires. She then commands the sheriffs to attack the terrified attendants. ("Let's Get Out of Here")

"Burning Down the House"[edit | edit source]

Sookie interrupts the bloodshed with her photokinesis. Marnie casts a spell to return herself and her vampire thralls to the Moon Goddess Emporium. ("Burning Down the House")

Still a slave for Marnie/Antonia, he is sent to attack Bill outside the Moon Goddess Emporium but is eventually killed by the free vampires. ("Soul of Fire")

Duprez possesses the common powers and weaknesses of a vampire such as superhuman strength, speed, senses, immortality and healing. Due to his age he is much weaker than older vampires such as Eric Northman and Russell Edgington. His weaknesses included a wooden stake to the heart, silver and fire, sunlight will slowly kill a vampire of his age.

Retrieved from "https://trueblood.fandom.com/wiki/Duprez?oldid=143549"
Community content is available under CC-BY-SA unless otherwise noted.