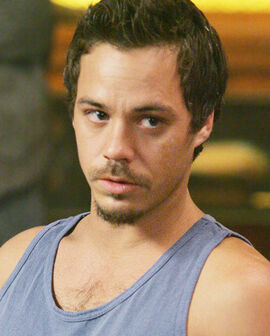 "No, you're the freak Cindy, you're the damn freak, fucking freak fuck! Spread your legs for a dead man! Momma would roll over in her grave!"
―Drew Marshall, to his sister Cindy Marshall[src]

"She deserves it, needs it, wants to die. They all do. That's why she fucks them Fangers."
―Drew Marshall[src]

Drew speaks with a deep Cajun (Acadian) accent. He has a rather thick tan, having fashioned a mustache and goatee with midlength, somewhat curly and spiked up hair. Most times he is seen Drew wears his Road Crew outfit, being a pair of khaki pants with a red T-shirt bearing the logo of that company.

In his previous life, he wore a Hawaiian styled shirt with blue jeans featuring the same belt worn in his present life at Bon Temps. When he goes out killing however, he hides his face with a darkened hoodie, still carrying the same belt used to strangle his sister.

Little is known about Drew Marshall's personal life prior to arriving in Bon Temps. He had a sister named Cindy who was a waitress at a Big Patty's Pie House but all that is known regarding his parents is that his mother has apparently passed (referenced in a comment made during a flashback where he argued with his sister). With the recent "Coming out of the Coffin" for Vampires, he began to harbor a pathological hatred for their kind and any human that would associate themselves with Vampires, and in particular, fangbangers. This intense hatred buried itself so deep that he lost control over his actions and had to act out.

Drew discovers that his own sister, who had known of his hatred for vampires and fangbangers alike, was in fact a fangbanger herself (by discovering bite marks on her neck). He erupts in a slur of curses, and insults her for what she had done. She orders him to get out. A psychotic rage then overtakes him as he unbuckles his belt and moves toward her. He proceeds to choke the life out of her with his belt. Immediately after killing her, Drew feels a mixed range of emotions and decides to leave town.

Drew starts a new life, abandoning the town he had lived in for so long and becomes a new man named René Lenier. Adopting a deep Cajun accent, he sets off for Bon Temps where he meets Arlene Fowler and the rest of the locals, finding a new life.

Drew worked on the road crew with Jason Stackhouse, Hoyt Fortenberry and Lafayette Reynolds. He was known in Bon Temps, Louisiana as René Lenier and was a seemingly very charming, nice man with a Cajun accent. ("Strange Love")

However, he turned out to be the killer behind a rash of murders including those of Maudette Pickens, Dawn Green, Gran, Sookie's cat and Amy Burley. ("Escape from Dragon House")

Gran's murder was accidental; he was expecting to find Sookie that night. ("Cold Ground")

"The Fourth Man in the Fire"[]

By the time he got to her house, his fury and blood lust had grown beyond control. He would later kill Sookie's cat as a warning to her, which went unheeded. ("The Fourth Man in the Fire")

The other three victims were killed because he believed they had slept with vampires. Drew was right about Maudette and Dawn, but not about Amy. He proposed to Arlene by pretending his truck had a flat tire. ("Plaisir D'Amour")

He later sabotaged Sookie's engine so that she would need a ride home, which he conveniently offered to her. Once at her house, René removed the shells from the shotgun that Sam had left for Sookie to use for protection. Sookie then read his mind and saw him killing her Gran. She ran to get the shotgun, but, after finding it without any bullets, she hit him over the head with it. Drew then chased her to the cemetery but lost sight of her when she jumped into an empty grave. ("I Don't Wanna Know")

He announced that he was thinking about going to the woods to look for her, but this was actually a ploy to get her to reveal herself, which she did. ("To Love Is to Bury")

When he got a hold of her, Sam (in the form of a dog) came leaping in to save her, having recognized René's scent from Dawn’s crime scene. At first, Sam held his own, but René quickly threw him off and began to beat him before Sookie grabbed a shovel and rammed it into the back of Drew's neck. ("You'll Be the Death of Me")

As the events progressed in Jackson, Mississippi, Arlene Fowler (René's ex-fiancee) started to develop various symptoms of pregnancy. She eventually heads in for a checkup, revealing that she is in fact pregnant with a child...and is shocked to find out the timeframe in which it was conceived. Knowing deep down that Drew Marshall was in fact the father of her unborn child, the news of pregnancy eventually slipped to her now boyfriend Terry Bellefleur and she began to lie, claiming the child as his. ("Night on the Sun")

As she went through her stages of pregnancy (which included mood swings and sickness), she began having a "wet dream" of sorts about Terry...only for him to suddenly be replaced by Drew, who spoke about their child in a chilling tone. Claiming for his little one to be just like Daddy, he proceeded to choke her amidst the dream.She later starts to imagine seeing him and is constantly aware of her surroundings, beginning to believe she is harboring an "evil" and "tainted" child, even going so far as to try and have it terminated via a Wiccan spell. The spell does not work in the end and the baby is unharmed.Lafayette Reynolds, after having his mind "opened" by his previous night's experience on V, also saw Rene standing behind Arlene, choking her. Whether or not this confirms that Drew is actually a ghost haunting her and their unborn child is unconfirmed. ("Evil is Going On")

Drew was mentioned several times throughout the season mostly by Arlene Fowler Bellefleur, as her paranoia regarding her son with him grew to an intense level when the ghost of Mavis began shadowing her child (though it's unlikely that she burned down their house for her own purposes). However, he never actually appeared until Halloween night outside of Merlotte's. With the layer thin between the world of the living and deceased, he was able to manifest clearly to her which startled Arlene and put her fears into reality. He reassured her that there was no intent to harm her, that he really did love Arlene and his child: he came there to warn her about Terry, claiming that a "ghost from his past" would prove dangerous for both her and little Mikey. As Terry came to check up on Arlene, Drew yelled at her to "run!" before vanishing.("And When I Die")