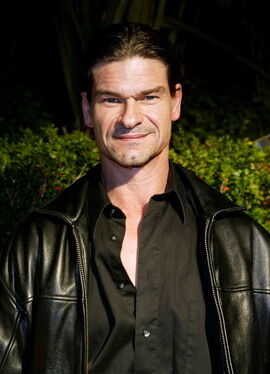 Don Swayze, born August 10, 1958 in Houston, Texas, is an American actor who plays the role of Gus on the HBO original series True Blood. Making his debut on the episode "Bad Blood", at the beginning of the series' third season, Don plays the role of a werewolf biker. A member of Cooter's pack, and a guard for Russell Edgington, the Vampire King of Louisiana, he was killed by Jessica Hamby after attempting to capture Sookie Stackhouse with Russell and Debbie Pelt. Dan is a guest starring actor who plays a recurring role through the same season, and meets an untimely demise in the Season 3 episode "Night on the Sun".