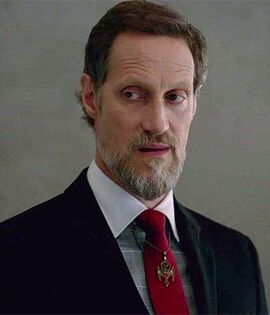 "Allow me to deal with these traitors, Guardian. They will beg for the True Death!"
―Dieter Braun[src]

Dieter Braun was a vampire on the HBO original series True Blood. Played by Canadian co-starring actor Christopher Heyerdahl, Dieter makes his debut on the episode "Authority Always Wins" in the series' fifth season. Chancellor of the Vampire Authority, Dieter is mature, self-possessed, calm and authoritative. He carries a piercing gaze, and is extremely intimidating, despite his slender frame. Playing a recurring role through the series' fifth season, he enjoyed using innovative methods to torture prisoners during interrogation. His methods of choice included injecting liquefied silver into the veins of his victims, and burning them with exposure to ultra-violet lights. Dieter met an untimely demise in the Season 5 episode "In the Beginning".

At the time he was made vampire Dieter was a tall, thin man whose dark brown hair was streaked heavily with grey.

Dieter was unwavering in his loyalty to Roman Zimojic, and the mainstreaming movement. Aside from Nan Flanagan, he was also the only Chancellor of the Vampire Authority that was not a Sanguinista.

Dieter also possessed a deep contempt towards organized religion, and its followers, referring to Nora as a "lunatic" when he observed her praying. Dieter claimed to know the author of the Book of the Vampyr, and regarded it not as the divinely inspired word of God, but as the demented scribblings of a mad-man who was "high" at the time.

Dieter Braun was born in Konigsburg, Prussia in 1770. His was a noble family who expected him to continue their dynasty. However, once Dieter begun his higher education, he became estranged from his family and fell in with a group of intellectuals centered around the philosopher Immanuel Kant. Dieter eschewed material possessions and begun to live as an ascetic, dedicating his life to scholarly pursuits.

This all changed when Prussia’s stability and peaceful stasis became threatened by Napoleon Bonaparte. Dieter wanted to do his part to defend the Prussian way of life, so he enlisted. At the battle of Jena-Auerstedt, the Prussian army was taking a heavy beating. Dieter, fighting as a foot soldier, found himself behind enemy lines outmanned five-to-one. Miraculously he overcame his enemies and returned home only slightly wounded. He refused accolades and medals, wanting only to return to his studies in the newly subjugated Prussia.

He was surprised one night to find someone waiting for him: a female vampire named Collette. Her human companion had been killed by Dieter and in a strange bit of logic, she felt Dieter to be the only suitable replacement. Dieter was by nature a curious man and granted her request. They began a relationship that resulted in Dieter being turned four years later.

When Bill, Nora and Eric are brought to the Authority's headquarters, the trio are separated and interrogated. Bill is placed under Dieter's supervision, who questions him regarding his religious beliefs, injecting him with liquified silver when he provides an inadequate answer. ("Authority Always Wins")

"Whatever I Am, You Made Me"[edit | edit source]

After Russell Edgington is revealed to be alive Dieter requests that he be allowed to torture Bill and Eric to death. Roman assures him that he will take his opinion under advisement and sends the chancellors away, except Salome. ("Whatever I Am, You Made Me")

Alexander Drew tracks Eric and Bill on his laptop from the authority headquarters. He assumes that they're doing nothing to track Russell Edginton down. Kibwe Akinjide wonders if anyone believes that Eric and Bill did indeed kill Russell a year ago. He suggests that this is a plot to give themselves more time before being killed. Dieter posits that it might be a hoax to rally the Sanguinistas. As they continue their debate, Dieter tells everyone to turn the channel watching Nora. Nora is shown praying to God and Lilith to protect her. Dieter hits the switch to the ultraviolet lights in Nora's cell and ridicules her prayers. Dieter asserts that the Vampire Bible is merely a book and that he knows the author, and that they were high on drugs when they wrote it. Rosalyn laughs and reminds him never to say that in front of Roman. Dieter says that Roman is not there for them to worry about.

"They dawdled around Bon Temps, visited the home of a local waitress, went to the Kwiki Mart and purchased... jumbo coffee and box of Nutter Butters, before traveling by cube van to a parking facility in Shreveport."
―Dieter, to Salome[src]

Dieter continues to monitor Bill and Eric's progress via their iStakes, and arranges for them to be terminated at dawn should they fail to find Russell.

He later stands alongside Roman, as the Guardian delivers an impassioned speech in support of mainstreaming to the ambassadors of the Authority. ("Let's Boot and Rally")

After Russell is successfully apprehended and brought to the Authority's headquarters Dieter, along with his fellow Chancellors congratulate Bill and Eric on their triumph. He expresses his excitement when Roman announces that Russell is to imminently executed, but his joy at the prospect is short lived, as Russell turns the table on Roman and stakes him in front of the entire Authority. ("Hopeless")

Once Salome, Nora and Russell take over the Authority and reveal themselves as Sanguinitas, they hold a ceremony in the authority chambers in which the other authority members are to drink Lilith's blood. Dieter is the only member who openly objects, claiming that drinking Lilith's blood is blasphemy. Russell quickly beheads him. ("In the Beginning")

Retrieved from "https://trueblood.fandom.com/wiki/Dieter_Braun?oldid=145253"
Community content is available under CC-BY-SA unless otherwise noted.