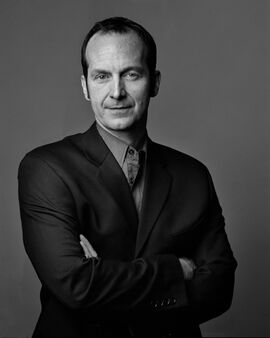 Denis Patrick Seamus O'Hare, born January 17, 1962 in Kansas City, Missouri, is an American actor who plays the role of Russell Edgington on the HBO original series True Blood. Making his debut on the episode "Beautifully Broken" in the series' third season, Denis plays the role of the former Vampire King of Mississippi, an almost 3,000 year old, ancient vampire who was formerly a Chancellor of the newly reformed Vampire Authority. Playing a recurring role through the series' third and fifth seasons, Dennis is a starring actor who meets an untimely demise on the episode "Save Yourself", at the end of the series' fifth season.

Denis O'Hare was born in Kansas City, Missouri, and grew up in the suburbs of Detroit, living in Southfield until he was 15, when his family moved to Wing Lake in Bloomfield Hills. His mother is a musician and he grew up playing the church organ. As a teenager, he was in his school's choir and in 1974 he went to his first audition, gaining a chorus part in a community theatre production of Show Boat. In 1980 he left Detroit for Chicago to study theatre at Northwestern University.

O'Hare holds an Irish passport. He came out as gay during high school.

O'Hare won a Tony Award for Best Performance by a Featured Actor in a Play for his performance in Richard Greenberg's Take Me Out, where his character's lengthy monologues in which he slowly falls in love with the game of baseball were considered the main reason for his award. He won the 2005 Drama Desk Award for Outstanding Featured Actor in a Musical for his role as Oscar Lindquist in the Broadway revival of Sweet Charity.

In 2004 he played Charles J. Guiteau in the Broadway production of Stephen Sondheim's Assassins, for which he was nominated for the Best Performance by a Featured Actor in a Musical Tony Award. He lost to co-star Michael Cerveris who played John Wilkes Booth. Before appearing in those shows, he appeared on Broadway in the 1998 revival of Cabaret, in which he played Ernst Ludwig onstage and the clarinet in the show's orchestra, the "Kit Kat Band".

In 2009, O'Hare portrayed Phillip Steele (an amalgam character based on Quentin Crisp's friends Phillip Ward and Tom Steele) in a television biopic on Crisp entitled An Englishman in New York. The same year he played therapist Dr. David Worth in the series Bored to Death (episode 1.3).

In 2010, O'Hare joined the cast of HBO's True Blood in its third season as Russell Edgington, the vampire king of Mississippi who is 2,800 years old. In 2011, he appeared in the film The Eagle as a Roman officer named Lutorius. Recently he has appeared in a recurring role as Judge Charles Abernathy on the television drama series The Good Wife. O'Hare currently co-stars as Larry Harvey in FX's American Horror Story.

In 2012, O'Hare starred alongside Amy Adams and Donna Murphy as the Baker in Stephen Sondheim's Into the Woods at The Public Theatre. The production played at the Delacorte Theatre in Central Park, NYC from July 23 to August 25, 2012. 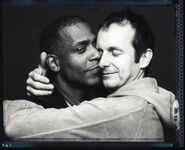 Denis with his husband, Hugo.
Add a photo to this gallery

Retrieved from "https://trueblood.fandom.com/wiki/Denis_O%27Hare?oldid=140609"
Community content is available under CC-BY-SA unless otherwise noted.