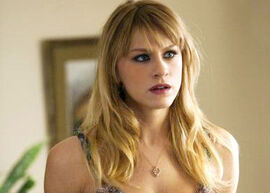 Deborah Susan Pelt, better known simply as Debbie, is a werewolf on the HBO original series True Blood. Played by American guest starring actress Brit Morgan, Debbie makes her debut on the episode "9 Crimes" in the series' third season. The pathologically jealous and vigilant on and off girlfriend of werewolf biker Alcide Herveaux, Debbie plays a recurring role through the series' third, fourth, and fifth seasons. Serving as an antagonist in the third and fourth seasons, and played by American guest starring actress Heather Hopkins in flashbacks of a young Debbie, Debbie meets an untimely demise on the episode "And When I Die" at the end of the series' fourth season. She appears once more, in a flashback on the episode "Everybody Wants to Rule the World", in the series' fifth season.

Debbie was mean-spirited and vindictive, and her relationship with Alcide had been tumultuous. She was also pathologically jealous and vigilant. She became maniacal after being bested by Sookie on many occasions. However, most of this behavior was due to being addicted to vampire blood, as when she was clean, she was shown to be a fairly pleasant and nice person, even willing to help Sookie on occasions. That said, Debbie still felt jealous about Sookie which eventually drove her to take V again and go after Sookie.

Debbie was in the pack since she was a teenager. Jackson Herveaux, Alcide's father questions Debbie if she'll choose between human or pack. Debbie chooses pack.

Later on, Debbie was engaged to Alcide Herveaux, and would have done anything for Alcide when they were together but he wouldn't give her a baby because he didn't want to bring another one of their kind into the world. ("Hitting the Ground") This is part, if not all, of the reason she left him for Cooter.

Sookie and Alcide come to Lou Pine's for Debbie's engagement party. There Debbie meets Sookie and when Alcide comes to her rescue, Debbie tells Alcide she's happier now then when she was with his "pussy pack". Eventually Cooter walks over but Debbie tells him that he should let Alcide stay and watch, since that's the only way he'll understand and leave them alone. During the ceremony, Debbie is branded. ("9 Crimes") The next morning she visits Alcide's apartment and threatens Sookie for sleeping with Alcide. ("Trouble")

When Bill was tortured by Lorena in the "slave quarters", Cooter and Debbie, with Lorena's permission, drink Bill's blood. ("I Got a Right to Sing the Blues")

The two leave but she later returns and busts in on Alcide, Sookie, and Tara when they are trying to rescue Bill Compton. She is frazzled and just wants some more V.

Sookie screams to distract her and Tara slams her against a wall and disarms her. Alcide picks up the gun just as Debbie's fiance, Cooter, walks in. Cooter makes a move towards Alcide but Alcide shoots him in the chest and then the head. Debbie is enraged by Coot's death and advances on Alcide but he holds her off by pointing her own gun at her. She threatens to hunt Alcide down and Alcide says he believes her before he locks her in the "slave quarters". ("Hitting the Ground")

The next night, Debbie goes to Russell and begs him to let her hunt down Sookie, Alcide and Tara. Russell promises that she will have her time with Sookie once she is captured. She along with Gus and another werewolf accompany Russell when he goes to Bon Temps after Sookie. While Russell waits outside and Gus and the other werewolf fight with Bill and Jessica, she goes upstairs after Sookie. Debbie disarms Sookie and the two start fighting. After cutting Debbie's face with scissors, Sookie retrieves her shotgun and forces Debbie to jump out the window and run away. ("Night on the Sun")

A year later its revealed that Debbie was able to detox from V and cease being dependent on it, having been sober for nearly a year. Along with this, she greatly cleans up her formerly deteriorating appearance, so that she looks much more respectable and becomes more polite. She and Alcide resume their relationship and are currently living together. She has also seems to have found religion in the form of Christianity.

When Sookie came to talk to Alcide, Debbie sincerely apologized for attacking her, and asked for her forgiveness, although she nervously overdoes her hospitality. While Sookie doesn't forgive her yet, Sookie expects her to get better saying "stranger things had happen". ("If You Love Me, Why Am I Dyin'?")

After Alcide returns home from helping Sookie, he and Debbie begin to make out on their sofa. She seems to be jealous of Sookie, but plays it off that she isn't. ("I'm Alive and on Fire")

Alcide and Debbie are headed to join a new pack after Marcus Bozeman visited their home, when they find Sookie in the woods as she searched for Jason under a full moon. She asks them about werepanthers, and Alcide gives her information. Sookie is out on a full-moon night, and it's obvious that Alcide is worried about her, however he followed Debbie instead. ("I Wish I Was the Moon")

The same night she is excited to be at the pack meeting and later she suggests Alcide to find Sookie. However they stumbled upon Sookie having sex with Eric in the woods.

While having sex with Alcide, Debbie asks if he is thinking about seeing Sookie and Eric. Alcide explains to Debbie that, while he cares about Sookie, he is not in love with Sookie. He says that he is in love with Debbie, and that she should not be afraid of losing him. ("Cold Grey Light of Dawn")

Feeling abandoned by Alcide who in her impression, worries too much about Sookie, she makes him promise not to approach her anymore. However, he breaks his promise by going to rescue the telepath in the cemetery whilst a battle rages between vampires, and Marnie and the witches, without realizing that Debbie (in the form of wolf) has followed him. She seems to put herself on the road to vengeance, but when her boyfriend returns home, Debbie makes as if she had seen nothing. ("Spellbound")

The next day, she buys a dose of V from a dealer to give herself some courage and speaks face-to-face with Sookie. They both finally make peace, Sookie reading her thoughts and Debbie making her understand that Alcide is the man who counts for her (admitting that Cooter was the worst thing in her life).

Debbie helps Sookie get into the Moon Goddess Emporium by making Marnie answer the door and claiming the werewolves want an alliance with the witches. Sookie tries to free Eric but is unable to because he is hypnotized under a spell. Sookie reads the thoughts of Tara, who is being held hostage by Marnie. Tara warns her that Marnie is planning to attack the "Festival of Tolerance" and Sookie rushes there to warn Bill. ("Let's Get Out of Here")

"Burning Down the House"[]

Debbie soon gives in to the romantic advances of her packmaster Marcus Bozeman, who promises her a better future that will include motherhood for her, something Alcide does not want. ("Burning Down the House")

Debbie gets caught with Marcus when Alcide, Sam Merlotte and Luna Garza confront him over kidnapping his and Luna's daughter Emma. Marcus had been trying to convince Debbie to run away with him, but she turned him down because of her feelings for Alcide. Upon seeing Debbie betraying his trust though, Alcide snaps and abjures her, just after having murdered Marcus to protect Sam. Debbie is left alone in the house, all of her lovers taken from her, sobbing. ("Soul of Fire")

During Halloween, she manages to make her way inside Sookie's house and waits for her to return. When she does she confronts Sookie with a shotgun, ready to kill her saying "I should have done this a long time ago" and shoots at her. However, Tara takes the shot to the side of her head to save Sookie, shocking Debbie long enough for Sookie to charge her down and disarm her. Sookie elbows her in the struggle and grabs the shotgun. Debbie begs for her life as Sookie hold the gun on her. Sookie, angry over Tara, pulls the trigger, blowing her jaw off. ("And When I Die")

The season begins with Debbie shooting Tara and Lafayette Reynolds running downstairs to Sookie's aid. Sookie explains that Debbie tried to kill her but Tara jumped in the way. When Pam enters, Pam views Debbie's dead body with her head lying in a pool of blood with her jaw missing. Later on Sookie and Lafayette bury Tara in the backyard for a turning. When Sookie enters the house to clean up Debbie's body. Sookie explains that she wanted to kill Debbie for Tara's murder. Debbie's last appearance is when Sookie picks up pieces of her jaw and drags away her body. ("Turn! Turn! Turn!")

Jason Stackhouse and Andy Bellefleur discover Debbie's truck parked a quarter a mile away from the Stackhouse home. Inside is vampire blood, her drivers license and it is revealed her real name is Deborah and her middle name is Susan. If you look closely you can see a picture of Debbie on her license. Jason empties out the vial of vampire blood. ("Authority Always Wins")

Andy Bellefleur arrives at Merlotte's with a picture of Debbie smiling, presumably after she went sober. Andy interrogates Sookie and Holly Cleary. ("Whatever I Am, You Made Me")

Alcide has a flashback when he and Debbie were teenagers. Jackson Herveaux, Alcide's father, questions Debbie if she'll choose between human or pack. Debbie chooses pack. ("Everybody Wants to Rule the World")

Debbie was a werewolf. In wolf form she was more likely more powerful than a human, but weaker than a vampire of a moderate age. In human form however; she can be defeated in a fight- as seen between Debbie and Sookie. (Debbie and Sookie strengths were enhanced during the fight due to vampire blood). In human form she displayed heightened senses and she can make her eyes glow by will or strong emotions.