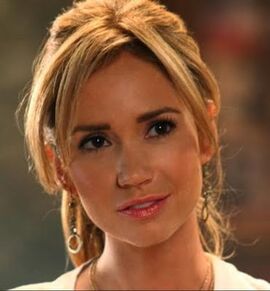 Daphne Landry was a waitress on the HBO original series True Blood. Played by American actress Ashley Jones, Daphne makes her debut on the episode "I Don't Wanna Know" in the series' first season. Working at Merlotte's Bar and Grill, she took the position formerly possessed by the recently deceased Amy Burley. A recurring character through the series' second season, Daphne was a love interest of Sam Merlotte, as well as a servant of the Maenad Maryann Forrester. Serving as a secondary antagonist through the same season, she met an untimely demise in the Season 2 episode "Release Me", and was last seen in a flashback on the episode "Beyond Here Lies Nothin'", at the end of the series' second season.

Before getting the waitress job at Merlotte's she worked at the Cracker Barrel. Daphne is a Shapeshifter, like Sam. Her go to animal is a pig. While she was running in the woods as the form of an animal, Daphne was attacked by something. This attack left her in pain and nearly dead. Daphne survived but was left with three long scars down her back. She was later befriended by Maryann Forrester.

Daphne was hired as a waitress at Merlotte's as a replacement for Amy. She repeatedly forgot orders and spilled things, which made her unpopular with Arlene Fowler. Daphne revealed to Sam that not only did she know that he was a shapeshifter, but also she was a shapeshifter. They soon begin a romantic relationship, however, it was revealed that Daphne had been under Maryann's control for some time.

Daphne has the same scratches on her back as Sookie and the corpse of Miss Jeanette. Daphne later lured Sam to Maryann's bacchanalia to be sacrificed, however, Sam was able to escape. The next day, Daphne told him that he was weak and powerless compared to Maryann, prompting Sam to tell her to stay away from him. Daphne provided Sam with some useful information such as Maryann's supernatural identity as a Maenad, her powers, and that she is immortal. Daphne also tried to convince Sam to go to Maryann. That night, Daphne was murdered by Eggs, who was under Maryann's control. Her body was found in Sam's walk-in refrigerator at Merlotte's, with her heart removed, in an attempt to frame Sam for her murder.

Maryann later used Daphne's heart to make a hunter souffle, which she fed to Tara and Eggs.

Late 20s / early 30s - Daphne is sexy and down to earth, a real country girl, not the greatest waitress, but Sam Merlotte (Sam Trammell) couldn't care less, once he gets to know her better. Common sense, no-nonsense, funny, definitely not neurotic. Nudity is preferable in this role...6 episode arc beginning with "Nothing but the Blood". 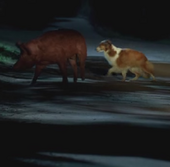 Daphne in pig form with Sam in his dog form 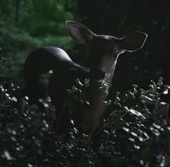