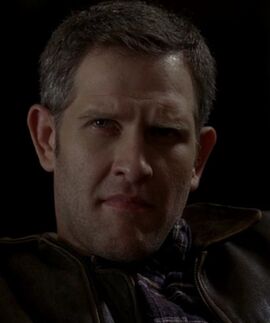 Corbett James Stackhouse, born in 1959, was a recurring character on the HBO original series True Blood. Played by guest starring actor Jeffrey Nicholas Brown, Corbett makes his debut on the episode "The First Taste" in the series' first season. The son of Earl and Adele Stackhouse, the older brother of Linda Stackhouse, and the uncle of Hadley Hale, he married Michelle and they had two children, series' protagonist Sookie Stackhouse and her brother Jason. Playing a recurring role through the series' first, fifth and sixth seasons, Corbett met an untimely demise in the 1990s along with his wife. They were purportedly killed in a flash flood. However, in the Season 5 episode "We’ll Meet Again", Hadley tells Jason that his parents were killed by vampires. Corbett was last seen, as a ghost, in the Season 6 episode "Don't You Feel Me".

Claudine Crane told Sookie that "it wasn't the water that killed them", when referring to Sookie's parents having been killed in a flash flood.

Hadley tells Jason that his parents were killed by vampires and not the flash flood. ("We’ll Meet Again")

Jason has visions of his parents after learning that they were murdered by vampires. He visits their grave, his grief rekindled by the new information. ("Let's Boot and Rally")

Jason seemingly awakens from a nap to see his father. He reminisces about his mother and father, remembering that his father always used to call him "champ," and that it made him feel good. His father smiles and listens as Jason says "I swear to God, and to you both, I'm going to find that vampire that killed you, and make him pay for what he did you our family." Jason's father nods and says, "The only thing you have to fear, is..." Jason truly wakes up before his father can finish, alone. ("Hopeless")

Sookie attempts to connect with her mother the night she was killed to help to figure out who was responsible. She becomes her mother, watching as a vampire breaks into the car and kills her father. But then she starts seeing the event from the vampires point of view, as he kills her mother and then finds the band-aid with Sookie's blood in the backseat. Claudine shows up and drives the vampire away. Sookie is knocked off her feet (as the vampire was) and the vision ends. ("Somebody That I Used to Know")

After sustaining a head injury Jason hallucinates the he is seeing his parents urging him to hate vampires. During his mission to infiltrate the Authority Headquarters with Sookie they congratulate him on destroying several vampires. ("Save Yourself")

Corbett possesses Lafayette Reynolds and attempts to drown Sookie as she begs Corbett to not kill her in order to keep her safe from Warlow.