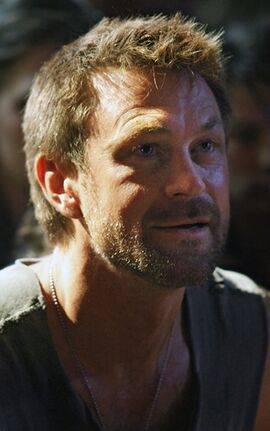 "You're about to get deader, dead-ass motherfucker!"
―Cooter, to Bill Compton [src]

Cooter, also known as "Coot", was the leader of a biker gang known as the F*ck You Crew on the HBO original series True Blood. Played by American Kiwi co-starring actor Grant Bowler, Cooter makes his debut on the episode "Bad Blood", at the beginning of the series' third season. The leader of the gang formed by werewolves serving Russell Edgington, an ancient vampire and the Vampire King of Mississippi, Cooter, like his fellow packmembers, was addicted to Vampire Blood ("V"), which was regularly supplied to them by Edgington himself. Serving as a supporting antagonist through the series' third season, Cooter played a recurring role through the same season, and met an untimely demise on the Season 3 episode "Hitting the Ground".

A month before season 2, Debbie Pelt breaks up with her fiancee, Alcide, and goes to Cooter. As a packmaster serving the King of Mississippi, Cooter is given the task of kidnapping Bill Compton and bringing him to the King's mansion.

After Cooter and his gang kidnapped Bill, they begin to drink Bill's blood. Bill somehow gets loose and kills the driver causing the car to go off road. One of Coot's gang members dies in the crash but Coot and three of his friends survive. ("Bad Blood")

Once Bill feeds he plans to escape from the forest but then is held up by Coot and his gang who are now in wolf form.

In the end Bill kills three wolves and bites off the ear of another. Coot is the last standing wolf, but then the vampire king comes and stops the fight. Cooter shifts back to his human form and reveals the king's plans. ("Beautifully Broken")

Cooter, later on, turns out to be the one who is marrying Alcide's ex-girlfriend Debbie Pelt. Coot plans on initiating Alcide's ex-girlfriend into his pack. The King goes to the were club and supplies everyone with his blood and once they all take their shot the wolves begin to howl. Cooter is the first one to shift into a wolf and stands on a speaker. He then howls and the rest of the club begins to shift. ("9 Crimes")

The next day Coot visits Bill, and tells him that Sookie Stackhouse is having sex with a werewolf. This enrages Bill to the point where he's able to overpower both Coot and the guard and escape. Coot tracks Bill to Alcide's apartment. When he corners Sookie, she displays the same blue light power she once used on Maryann, and throws him across the room. ("Trouble")

The morning after Sookie and Bill are captured, Coot and Debbie enter the shack where Lorena was torturing Bill, and with her permission feed on Bill's blood ("I Got a Right to Sing the Blues")

Sated, the two leave the shack, but Cooter returns later to find Debbie being held by Tara. Coot tries to attack Alcide, but is shot in the chest. When he tries to change form, Alcide shoots him in the head. An enraged Debbie swears revenge for Cooter to Alcide. ("Hitting the Ground")

Cooter was a werewolf. He was more powerful than a human, but weaker than a vampire of a moderate age. In his wolf form his fur was dark gray, and his eyes were orange. When using "V" Cooter became even more powerful. As a Packmaster, his howl ordered his pack to shift, a powerful transformation that couldn't be ignored by any werewolf present. Cooter was stronger than all of the werewolves in his pack but far weaker than werewolves such as Alcide Herveaux.

In his 30s, menacing, the ringleaders of the F*ck You Crew, he and his biker thugs take turns stabbing Bill and feeding on him. Coot hates being told what to do…VERY STRONG RECURRING