"Cold Grey Light of Dawn" is the seventh episode of Season 4 of the HBO original series True Blood, and the series' forty-third episode overall.

With Marnie empowered by spirits of the dead, Bill issues an unpopular order to save vampires from the light. Eric embraces his amnesia; Luna discovers Sam is not the man she thought he was; Lafayette expands his consciousness; Pam gets a body peel; Andy's date with Holly doesn't go as planned; Jessica has doubts about her future with Hoyt; Alcide and Debbie join a new pack.

Antonia has successfully entered Marnie's body. Her first move is to take mind-control of her Inquisition-era torturer and rapist, Luis Patiño, finally fulfilling vampire fears that humans will be able to control the dead. She forces Luis to kill Bill’s lieutenant Katerina, in revenge for her betrayal of the coven.

Pam, still deteriorating from Marnie's curse, attacks Tara and Naomi. Tara gets lucky when a bunch of tourists start snapping photos. “Is that a zombie?” one of them asks excitedly. To protect her vanity more than anything else, Pam releases Tara but warns her she’ll come after her once more.

Sam takes Tommy to a hospital after discovering him unconscious with a high fever in a pool of bloody vomit. The doctor diagnoses him with food poisoning. Tommy lies to Sam and tells him that he must have eaten something that had poisoned him while running in a shifted form at the full moon. He mentions nothing of Luna's visit or his new skinwalking ability.

Lafayette and Jesus are still holed up in Mexico and have just realized that Lafayette is capable of being possessed by spirits. After Jesus feebly tells his grandfather that he won’t stay there any longer, the old man reveals that Lafayette is a medium. “You have the magic,” he whispers conspiratorially to Lafayette in Spanish.

Packmaster Marcus has rounded up his pack. He anoints Debbie and Alcide with deer blood as an initiation rite. Debbie is thrilled but Alcide is more reluctant to join in the festivities and sits himself away from the pack. He feels badly about it, but is visibly relieved when Debbie says there is time to look for Sookie in the woods. As they are searching they stumble upon a moaning Sookie and Eric, who are still vigorously frolicking beneath the moonlight. The sight makes Alcide even more depressed, which Debbie immediately picks up on.

Bill is pouring Tru Blood from a decanter when Luis wanders in, still under Marnie's control. A struggle ensues, during which Luis shoots Bill with a silver bullet. Luis ends up forcing a silver and wooden stake into his own heart, whispering the word “resurrection” before exploding.

Tara tells her girlfriend Naomi to leave town because as long as she stays she will be at risk. Naomi reluctantly complies.

Jason is having sexual fantasies about Jessica, due to drinking her blood. He vigorously exercises in an attempt to distract himself. Hoyt visits to check up on him, concerned over how Jason is recovering after his captivity and rape at the hands of the residents of Hotshot. Jason avoids the subject, and Hoyt brings up his deteriorating relationship with Jessica. He says that he can feel Jessica "slipping away" and believes that losing her might kill him.

Bill explains to his Sheriffs that Antonia/Marnie will cast a spell to force every nearby vampire to meet the sun the next morning. To avoid mass incineration, he instructs the vampires, as well as all of the vampires in their areas, to bind themselves with silver in their coffins to resist the spell.

Sookie and Eric continue their lovemaking from the woods into the house on the floor before eventually doing it doggy style in front of the mirror. Sookie and Eric cuddle in bed post-coital bliss. Eric tenderly tells her, “I’m listening to your heartbeat. I can feel it…every pulse.” He tells her that he can imagine her heartbeat as his own and that she makes him feel alive.

Pam calls in Dr. Ludwig, who painfully peels the skin from her entire body, exposing her muscles. She suggests that special injections could restore Pam's appearance, but cannot break the spell; Pam is still rotting on the inside. She tells Pam that in order to maintain her appearance she will have to give herself six injections of the drug every four hours for the rest of her immortal existence.

Bill visits Sookie and Eric before morning and silently deduces that they have slept together. He has come to help Eric survive the next day, bringing multiple silver chains. He explains the situation to them and instructs them to bind Eric if they want him to survive.

Tara runs into Antonia/Marnie in the woods, and is convinced to join her after Antonia explains that she too has suffered tortures at the hands of vampires, and sees Tara as a kindred spirit.

Jessica and Bill have themselves silvered by a member of Bill's security team, in the cells beneath Bill's house. Bill is pained to see Jessica burned by the silver and insists on restraining her himself. They take the time to talk. Jessica confesses that she doesn't love Hoyt as much as he loves her. She attributes her lack of interest to the disappearance of her human heart. Bill attempts to comfort her by arguing that "Not loving Hoyt doesn’t mean you’ve lost your humanity. We’re all, at our core, human.” They also speak about Antonia, and Bill reveals that he sympathizes with her, as he is aware of the horrible things vampires have done to her and to so many others. While Jessica argues that Antonia should be killed, Bill tells her he is tired of killing, lamenting the fact that in over a century he has done very little good in the world.

Pam is slowly recovering from her peel with a thin layer of skin restored. She has placed her quilted pink coffin in the dungeon of Fangtasia and has Ginger cover her in a sheet of silver chain-mail.

Sookie stays and talks with a still-bound Eric during the afternoon. He attempts to convince her to remove the silver, and she refuses. Eric believes that Antonia may be powerful enough that the silver won't be able to restrain him under her spell. He says that he would prefer Sookie's last memory of him be in a different situation. Sookie reminds him of the last time she saw him bound in silver; when he attempted to save her and Godric from the Fellowship of the Sun. He says that he doesn't want his memory back. He believes that if Sookie can forgive him for the horrible things he's done then he doesn't want to remember them. He says that he is perfectly happy the way he is. Sookie says that she is as well, but is not going to let him out of the silver. Jason comes to the house, and Sookie briefly leaves Eric to talk to him. She explains the situation and Jason realizes that the spell, once cast, will affect Jessica as well, and runs off to save her.

Sam goes to visit Luna at her school, after calling her and getting a cold response. She is still upset about his ill-treatment of her after they had sex the previous night. He explains that he had been dealing with the aftermath of a fire the previous night and could not have slept with her. He and Luna realize Tommy has skin-walked, which accounted for his high fever and vomiting.

Tommy's actions push Sam to the limit. He nearly strangles Tommy in a rage, accusing him of planning to kill Sam and take over his life. Tommy denies the claim and apologizes to Sam, but Sam kicks him out of the house.

While having sex with Alcide, Debbie asks if he is thinking about seeing Sookie and Eric in the woods. Alcide explains to Debbie that, while he cares about Sookie, he is not in love with her. He says that he is in love with Debbie, and that she should not be afraid of losing him.

Andy and Holly have a farcical first date. He brings her Winn-Dixie flowers that he got on sale and is in the midst V withdrawal. He ends up dashing out of the bar with his sale flowers still in hand.

While at work, Lafayette sees a strange woman in his kitchen. Only he and Arlene's son Mikey are aware of her. Lafayette does not realize that she is invisible to a nearby Arlene. The woman is surprised that he can see her, but concentrates her attention on Mikey. Lafayette, disturbed by her behavior, yells at her and she disappears.

Antonia/Marnie, Tara, and the Coven assemble. They cast Antonia's spell instilling an irresistible urge to meet the sun in nearby vampires. It begins to take effect.

Ginger hears Pam screaming to be let out of the coffin. The coffin begins to shake and Ginger is forced to get on top of it to stop Pam from escaping.

Sookie has difficulty in restraining Eric, even with the silver. He screams at her to let him go. She pleads with him that he will die and he yells at her that he doesn't care.

Mrs. Fortenberry is watering her plants and witnesses her neighbor Beulah Carter, who had hidden her identity as a vampire, burning to death as she meets the sun. Despite having a running hose in hand, she makes no attempt to save Beulah and remarks that she "knew it!"

The spell forces Jessica to break some of her silver chains; out of sympathy for her pain, Bill had unwisely placed less silver on her than his guards used on him. She escapes her cage after killing a security guard and stealing his keys. She ignores a direct order from Bill to free him as well. She should have been unable to resist Bill's command because he is her maker. She crawls towards the front door, unable to walk properly with silver cuffs on her ankles.

Jason sprints towards the Compton house, but is tackled by a security guard as he is near the entrance. The guard draws his gun on Jason.

A shot is heard as Jessica opens the doors and sunlight floods over her. 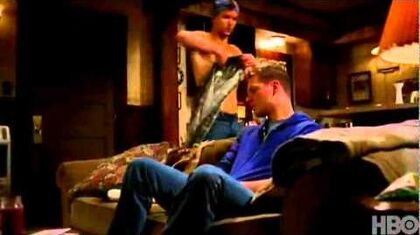 Antonia Gavilán de Logroño: "Understand this: vampires are not immortal. They are only harder to kill, and that is where our humanity is our advantage — for our human spirits are immortal. Let us show these vampires the fury and power of the human spirit."

Bill Compton: "If you care anything for him, you will do this, or it will be his last day on earth..."

Dr. Patricia Ludwig: "I can make you look pretty again, or at least what you looked like before, whatever you called that."

Lafayette Reynolds: "I felt like a giant ass puppet for your ghost uncle."

Maxine Fortenberry: (as her vampire neighbor bursts into flames) "I knew it!"

Tara Thornton: "Everyone who's ever been with me has ended up dead. It ain't a long list, but it's a bad one to be on."