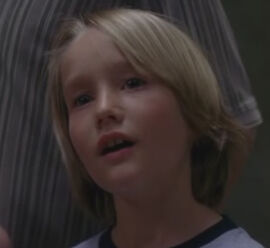 Coby Fowler is the son of Arlene Fowler Bellefleur and brother of Lisa Fowler. Coby is seen early in season 1, sitting with his family at the meeting of the Descendants of the Glorious Dead, where Bill Compton was guest speaker. ("Sparks Fly Out")

"The Fourth Man in the Fire"[]

His mother Arlene was friends with Sookie Stackhouse and worked with her at Merlotte's Bar and Grill. In one episode, Coby and Lisa were babysat by Sookie and Bill Compton (a vampire). Arlene was uneasy around the vampire but Coby and Lisa were excited and eager. They even asked Bill if they could see his fangs. ("The Fourth Man in the Fire")

In Season 2, we saw more of Coby and Lisa when, in the final few episodes, they appeared at Merlotte's having run away from their mother who was under Maryann Forrester's spell. Sam Merlotte helped them, and, in an attempt to help 'sick' Arlene, Sam took them to see Eric Northman, where they proceeded to ask Eric to show them his fangs. ("Frenzy")

In the final episode of Season 2, Coby and Lisa showed themselves to be more mature than other kids their age. This was demonstrated twice: once when Arlene was upset because she had neglected Lisa and Coby during the time she was under Maryann's control, and they forgave her; on another time when Arlene told her children that René was on a vacation with Jesus, but they both admitted they knew he was dead. ("Beyond Here Lies Nothin'")

Season 4 showed Lisa, her brother Coby, and their mother Arlene asleep on the sofa. While they slept, Terry walked around the house taking care of Mikey and doing laundry. Terry sat the baby down on the floor to play while he went to check the dryer. When he returned, he saw writing on the wall behind Mikey that said baby not yours. At seeing this Terry started yelling, which woke up Lisa, Coby, and Arlene. Sitting up on the sofa they all three stared at the wall where Terry was pointing. Convinced that it was the spirit René, Arlene and Terry decide to call a priest and have an exorcism. ("I'm Alive and on Fire")

One night Arlene and Terry's house catches on fire, frantically Arlene searches for Mikey while Terry gets Lisa and Coby out. Terry has to carry Arlene outside to make her leave the house. As Arlene screams for her children, Terry points them out to her safe on the lawn. Arlene rushes over to make sure that they are OK. When Arlene asks them how the baby got outside, Lisa and Coby tell her that they don't know. They tell her the baby was already sitting in the yard when they came out playing with that old creepy doll. ("I Wish I Was the Moon")

Terry's army squadmate Patrick Devins stays with the family. He eats breakfast with them and they discuss the fire. ("Turn! Turn! Turn!")

Arlene struggles with Terry's death and distresses over how she is going to tell her children which she eventually does. ("In the Evening")

Coby is seen playing basketball when Sookie arrives to his house to comfort him and Lisa about their mother who is missing. She promises them that she will find Arlene and bring her back to them. ("Death is Not the End")

Coby appears in the 2015 Thanksgiving Dinner scene. ("Thank You")