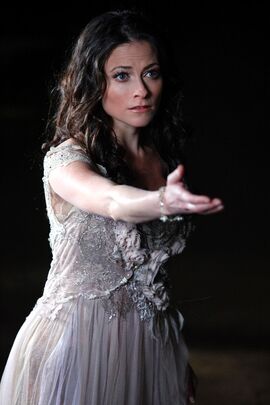 Claudine Crane was a full-blooded telepathic faerie with the power of Photokinesis on the HBO original series True Blood. Played by British guest starring actress Lara Pulver, Claudine makes her debut on the episode "Hitting the Ground" in the series' third season. One of seventeen sisters of the Crane family, including Claudia, Claudija, Claudwina and Claudette, and following under the leadership of her telepathic Queen, the Queen of the Fairies, Queen Mab, Claudine possesses only one brother, her fraternal twin, the telepathic fae Claude Crane. Playing a recurring role through the series' third, fourth, and fifth seasons, Claudine states that she and others like her had protected and, on occasion, saved Sookie Stackhouse from danger. Claudine met an untimely demise at the hands of Eric Northman in the Season 4 episode "If You Love Me, Why Am I Dyin'?", although she appears once more, in a flashback in the Season 5 episode "Somebody That I Used to Know".

When Sookie is comatose after being drained by Bill Compton, she meets Claudine in a dream. Claudine gives her glowing water to drink and asks her if she wants to come to her "home". As the portal to her is a pond, Sookie is afraid to enter, due to the fact that she does not know how to swim. Sookie hears Claudine's thoughts that "the water did not kill them". This implies that Claudine knows how Sookie's and Jason's parents died. When Bill comes to Sookie's hospital bed, night comes to the dream realm. The other Fairies in the dream enter the pond and Claudine warns Sookie to not let 'him' take her "light". ("Hitting the Ground")

A few days later, Bill enters the dream realm Sookie had visited. There he is met by Claudine, who first thinks that he has killed Sookie. After a short chase Bill pins Claudine down, but seems unable to control himself. Before he can feed on her, Claudine uses a powerful light power possessed by all faeries, and throws him a few meters away. Bill convinces Claudine that Sookie is alive and that he would never harm her, and also pleads with Claudine to reveal the true nature of what Sookie and Claudine are, so that Sookie can protect herself. ("Everything Is Broken")

The next night, when Sookie visits her grandmother's grave, Claudine and other fae appear to her. Claudine tells Sookie she is not alone and she should come with them. Sookie holds out a glowing hand to Claudine and the two disappear along with the other fairies. ("Evil is Going On")

Claudine magically transports herself and Sookie to her home dimension, known as Faery. Sookie inquires if Claudine is head of the fairies. Claudine laughs this off and tells Sookie she is actually her fairy godmother. Sookie snipes that she didn't do a very good job, to which Claudine replies "You're still alive aren't you?" Claudine then leaves Sookie so she can go and mingle with the other faeries and recently transported half faeries, such as old acquaintance Barry and her grandfather Earl Stackhouse.

When Sookie realizes that Faery is a trap for the half humans, she is confronted by the queen of the fairies, Mab. As Mab tries to force feed Sookie a Lumiere fruit in order to magically manipulate Sookie into seeing Faery as a bright, peaceful place, Claudine looks on guiltily. When Sookie accidentally uses her powers to uncover the true barren world of Faery and the grotesque face of the faeries to all those around; Sookie and Earl try to find a way of escaping Faery and its malevolent inhabitants. As Sookie runs off, a distressed Claudine calls out for her until she is ordered by Mab to go after them. ("She's Not There")

Claudine arrives at Sookie's front porch and demands that Sookie come with her back to Faery. She tells Sookie about the times she helped save her life, however, Sookie refuses. In a flash, vampire Eric Northman captures Claudine and begins to feed from her. With amnesia, Eric doesn't know how to stop drinking her blood. He kills her, making her true form appear and causing her to lose her light, thus bursting into a pile of fairy dust. ("If You Love Me, Why Am I Dyin'?")

Claudine's siblings help Sookie to connect with her mother the night she was killed to help them discover who was responsible for her parents' murder. She becomes her mother, watching as a vampire breaks into the car and kills her father. Sookie then she starts seeing the event from the vampire's point of view, watching as he kills her mother and then finds the band-aid with Sookie's blood in the backseat. Claudine shows up and drives the vampire away. Sookie is then knocked off her feet (as the vampire was) and the vision ends. ("Somebody That I Used to Know")

As a full blooded faerie, the full extent of Claudine's powers are not yet fully known. Claudine is capable of performing fae magic - the most obvious being photokinesis, in which she manipulates light energy as a form of attack against enemies. This is evidenced when she blasts Bill away from her when he breaches the fairy realm after drinking a large quantity of Sookie's blood. ("Everything Is Broken") Claudine is also capable of telepathy, the ability to hear the thoughts of others and communicate mentally, and this is seen on two occasions. ("Hitting the Ground") ("She's Not There") Claudine can teleport between the human and faerie worlds and also seems to be able to infiltrate dreams, appearing in those of both Bill and Sookie. ("Evil is Going On")  Lastly, Claudine is capable of banishing others to another dimension, which she is shown doing to Macklyn Warlow the night he kills Sookie's parents.