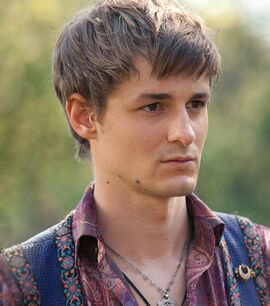 "Relax, we do not believe in the harvest of humans. That's why we escaped to your world before the last portal closed."
―Claude Crane, to Sookie Stackhouse[src]

Claude Crane was a telepathic faerie on the HBO original series True Blood. Played by American guest starring actor Neil Hopkins, Claude makes his debut on the episode "She's Not There", at the beginning of the series' fourth season. Brash and cynical, Claude is the owner of the faerie nightclub Hot Wings, and is brother to 17 sisters, including Claudine, Claudette, Claudia, Claudwina, Claudija and Claudellen. After the death of his fraternal twin sister Claudine, Claude has taken it upon himself to guard and protect Claudine's goddaughter Sookie Stackhouse. Replaced by American guest starring Giles Matthey, who plays the role of Claude Crane in the series' fifth and sixth seasons, Giles makes his debut in the Season 5 episode "Whatever I Am, You Made Me", plays a recurring role through the series' fifth and sixth seasons, and is presumed to have met an untimely demise in the Season 6 episode "You're No Good".

As a faerie, Claude is a gentle person by nature and does not believe in violence.

He also has a very protective streak, helping Sookie escape from the land of the fae and running Hot Wings as a faerie safehouse. When His sister Claudine died, Claude took over her duties in protecting Sookie.

From an early age, Claude was the “black sheep” of his family, refusing to become a godmother. He instead took on a carefree life of exploration and wandering between the faerie and human worlds. When Queen Mab began her campaign to stop travel between the two worlds, Claude joined those opposing Mab’s decision, channeling his passionate belief in freedom against Mab and her followers.

Claude first appeared when he and some other faeries, where helping Sookie and her grandfather Earl escape from Queen Mab and the other faeries.

He guided them to the portal to the human world but he told them that only Sookie could go because she hadn't eaten the Lumiere fruit. He encouraged Sookie to jump before Queen Mab could close down the portal, grandpa Earl trusted in him and took his granddaughter through the portal. ("She's Not There")

A year later, while in the human world, Claude goes to Tracy's Togs clothing store to collect an order for his 16 sisters. There he encounters Jessica, who is instantly drawn to him, due to the smell of his fae blood. He flees from the store and abandons his car in a field, escaping Jessica. ("Whatever I Am, You Made Me")

Jason brings Sookie  to Hot Wings. They quiz Claude, Claudia, Claudette and Hadley  inside the faerie club. Sookie asks if it's true that vampires killed her mother and father. Claude says that he only knows what Claudine told him: an Unknown Vampire ambushed their parents because he was drawn to something he smelled in the back seat of their car. In a flashback, Sookie's parents stop their car on a bridge so they don't hit a man standing in the middle of the road. The man rifles through their backseat, finding a bandage with Sookie's blood on it. Sookie angrily says that she doesn't believe Claude. She tries to manifest her photokinesis  but it fails, and a group of faeries in the bar shoot their own beams at her as she screams. ("Hopeless")

Claude and Claudia tell Sookie that since she is only half-faerie, her magic is finite. They warn that if she isn't careful how she uses it, it will run out and she will no longer be faerie. Sookie is intrigued by this possibility. She later attempts to expend all of her power. ("In the Beginning")

The faeries take Sookie to the bridge where her parents were killed. The help her to connect with her mother the night she was killed to help them figure out who was responsible. She becomes her mother, watching as a vampire breaks into the car and kills her father. But then she starts seeing the event from the vampires point of view, as he kills her mother and then finds the band-aid with Sookie's blood in the backseat. Claudine shows up and drives the vampire away. Sookie is knocked off her feet (as the vampire was) and the vision ends. ("Somebody That I Used to Know")

"Everybody Wants to Rule the World"

Sookie's investigation takes her to former sheriff Bud Dearborne who was first on scene when her parents were killed. Sookie visits him, not knowing that he has joined an anti-supernatural hate group. He takes her hostage and she narrowly escapes being murdered, rescue coming in the form of the police raiding his farm because of his involvement in a spate of anti-supernatural attacks.

Sookie is visited by the faeries as she recovers. They bring her food and company. They tell her about vampires being behind the Tru Blood factory explosions. ("Everybody Wants to Rule the World")

Sookie continues her investigation into her parents death and finds a scroll written in a strange language hidden in her family home. She takes it to Claude and his sisters at the faerie bar. Claude does not recognize the language and suggests showing it to an older faerie, Maurella, who is almost 500 years old. Maurella recognizes it as a contract written in faerie blood. She uses her powers to reveal the meaning of the document "5 August 1702, I, John William Stackhouse, in reference to our binding agreement on this said date, do grant Mr. M. Warlow my first fae bearing female heir." Jason asks Claude who the first female faerie was in that family since 1702 and Claude says that there were none, until Sookie. ("Gone, Gone, Gone")

Maurella, Claudette and Claude lead Sookie to the Faerie Elder, explaining that due to her old age, it is very hard for her to concentrate on any one topic for very long. Sookie asks the Elder about Warlow and she tells her that her, Warlow and Sookie's destinies are intertwined. Jason interrupts, shouting for Sookie out in the field. He warns Sookie that Russell is searching for her. The Faerie Elder is horrified that Russell is alive.

Jason leads Russell to the faery's field. The elder tries to fight Russell, using her photokinesis to throw Steve across the field. She accidentally hits Jason too. However, Russell is too quick for her and drains her. Having consumed her blood, he is able to see into the faeries sanctuary. He sees Sookie with the faeries and moves to attack them. ("Sunset")

Having draining the Faerie Elder Russell can see the fae hideout and moves to attack. The faeries use their combined power to hold him back. Sookie has to pause several times as her dwindling powers leave her unable to sustain the attack. Russell's advance is slowed by their blasts, but he believes that their light has no further effect on him. As the Faeries continue their attempt to keep him at bay, Russell is ambushed by Eric just as he is about to enter the nightclub. Eric takes advantage of the situation and manages to stake Russell bringing him the True Death, satisfying a long held lust for revenge. Steve Newlin looks on in horror as his boyfriend is staked and then runs off into the woods. The faeries are relieved to be out of immediate danger. ("Save Yourself")

When Niall visits Hotwings, he discovers that Warlow attacked the fairies who were there. He finds Claude on the floor severely wounded. Claude reveals that they were attacked by an extremely powerful vampire. He asks Niall not to leave him there like that. At first Niall said no, but Claude asks for the ultimate kindness to which Niall agrees. He tells Claude he was sending him home, as he sent a shock of light through his body. This turned him into dust, killing him. ("You're No Good")

Being a faerie, he has a vast array of fae magic, including Photokinesis and Telepathy.