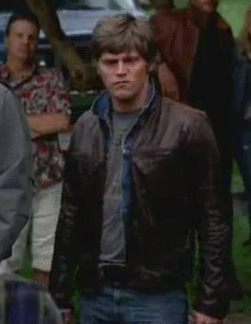 "Yo, speak for yourself!"
―Chuck, to Marcus Bozeman[src]

Chuck is a werewolf on the HBO original series True Blood. Played by American co-starring actor Drew James, Chuck makes his debut on the episode "Cold Grey Light of Dawn" in the series' fourth season. A werewolf in the Shreveport, Louisiana pack led by former packmaster Marcus Bozeman, Chuck wanted to play more of an active role in the Vampire-Witch War, and was last seen on the subsequent episode, "Spellbound", in the same season.

Chuck attends Alcide and Debbie's initiation into the pack, where he greets them along with the other weres. ("Cold Grey Light of Dawn")

Packmaster Marcus Bozeman summons the pack to forbid them to get involved in the war between vampires and witches. Chuck belligerently calls for the pack to be involved, but Marcus quickly puts him in his place. ("Spellbound")

Retrieved from "https://trueblood.fandom.com/wiki/Chuck?oldid=143100"
Community content is available under CC-BY-SA unless otherwise noted.