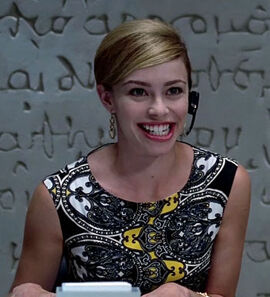 Chelsea was a receptionist on the HBO original series True Blood. Played by American co-starring actress Skyler Vallo, Chelsea makes her debut on the episode "Everybody Wants to Rule the World" in the series' fifth season. A receptionist for The Vampire Authority, Chelsea is an extremely minor antagonist who plays a recurring role through the same season, and meets an untimely demise on the episode "Save Yourself", at the end of the series' fifth season.

Chelsea proved to be not much of a fighter as she chose to sound the alarm rather than face intruders.

She makes Molly aware that Salome Agrippa placed a level one clearance mandatory for the departure from the AVL. ("Everybody Wants to Rule the World")

She discovers Steve Newlin's "pet" werewolf Emma Garza in human form and dresses her in a shirt. She lets Steve know what has happened when he returns to the headquarters. ("Gone, Gone, Gone")

Chelsea is at the front desk when Chancellor Rosalyn Harris arrives with Pam Swynford De Beaufort and Jessica Hamby in custody. ("Sunset")

As Steve (Luna shifted into Steve) is leaving the headquarters Chelsea stops him by saying she passed her statistics test. As Jason, Sookie, Eric, Nora, and Tara infiltrate the headquarters the elevator doors open and Jason spots Chelsea. Jason quickly shoots Chelsea, destroying her instantly, but not before she pushes the security button prompting an immediate level 2 lockdown. ("Save Yourself")

Retrieved from "https://trueblood.fandom.com/wiki/Chelsea?oldid=143821"
Community content is available under CC-BY-SA unless otherwise noted.