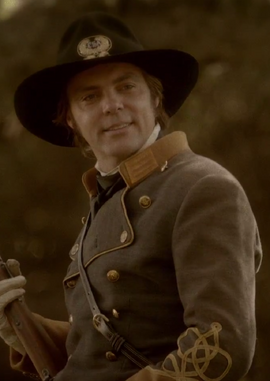 Charles Dupont was a member of the Confederate Army on the HBO original series True Blood. Played by Australian actor Matthew Holmes, Charles makes his debut on the episode "Lost Cause" in the series' seventh, and final, season. Appearing in only two episodes, Charles was last seen in "May Be the Last Time" in the same season.

In the 1800s, Charles riles up a group of local men to join the Confederate Army. Bill interrupts and says that the south is outmanned and outgunned, and that they have no chance of victory. Bill is thrown out and branded a "yankee sympathizer."

Later, Bill, his wife and baby, and a group of slaves, Bill's former slave Minus included, are on the run in an attempt to escape the war. They see a large group of Confederate Army men on horses and try to hide from them. Thinking the coast is clear, Minus starts walking telling everyone to follow him. Minus is abruptly shot by Charles, who demands they hand over the map they are using. Bill, in an act of defiance, burns the map. Furious, Charles aims his gun at Bill but is convinced not to shoot him by Bill's wife. Charles tells the group that Minus' death is a warning of what will happen to those who try to flee from the war. ("Lost Cause")

"May Be the Last Time"Edit

Charles is present when Caroline gives birth to her and Bill's baby girl. ("May Be the Last Time")

Retrieved from "https://trueblood.fandom.com/wiki/Charles_Dupont?oldid=143438"
Community content is available under CC-BY-SA unless otherwise noted.