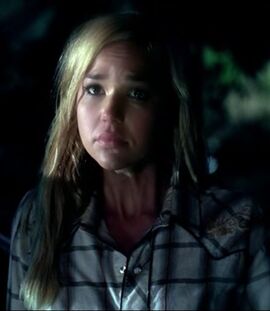 Charlene was an old girlfriend of Sam Merlotte on the HBO original series True Blood. Played by American actress Arielle Kebbel, Charlene was dating shapeshifter Sam Merlotte until circumstances drove them apart. Deciding to give it another shot, they got back together in 2003, but while the two were thieves together throughout much of their relationship, she had only been using Sam to get money for her boyfriend Jon. Through a series of unfortunate events, Sam shoots both of them in a fit of rage, and Charlene meets an untimely demise during her only appearance, on the episode "I Smell a Rat" in the series' third season.

Charlene is seen through a flashback witnessed by Sam Merlotte. Revealed to be a thief, Charlene (and her boyfriend, Jon), try to take advantage of Sam, only to be murdered in the process. ("I Smell a Rat")

Retrieved from "https://trueblood.fandom.com/wiki/Charlene?oldid=145062"
Community content is available under CC-BY-SA unless otherwise noted.