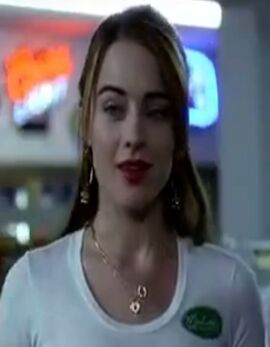 Charlaine Bellefleur, a telepathic faerie formerly known as Number Two, was a halfling on the HBO original series True Blood. A recurring character in the series' sixth season, Charlaine makes her debut on the episode "Save Yourself" at the end of the series' fifth season. Played by American actresses Abigail Lowe, Sam Schuder and Hannah Kasulka to represent Charlaine at three, eleven and eighteen years old, respectively, Charlaine is the halfling daughter of Renard Parish sheriff Andy Bellefleur and Maurella, a mysterious fae. Sharing her abilities with her sisters, Adilyn, Braelyn and Danika, Charlaine meets an untimely demise on the episode "F**k the Pain Away" in the series' sixth season.

A pregnant Maurella visits Merlotte's Bar and Grill and asks Andy for salt. She downs a whole shaker. As he tries to explain their affair to Holly, Maurella's light breaks and she goes into labor. Charlaine was the second daughter of Maurella and Andy to be born.("Save Yourself")

Andy finds himself overwhelmed with four new babies to take care of. Terry and Arlene help Andy with becoming a new father.

Andy wakes up to a surprise when he realizes his four infant fae babies have now grown significantly overnight to what seems like 3 year old children. Terry and Arlene are awoken by Andy's shock. They scream themselves to find four grown children in their house. ("Who Are You, Really?")

Wanting to party when they are still young, the four faeries sneak out of the house in the middle of the night. They stole some of Arlene's clothes and their fathers car to go buy some alcohol. In the liquor store they meet Jessica and decide to go with her and party at Bill's place.

When the four sisters try to leave Bill's house, Jessica becomes overcome with Bloodlust. Unable to control herself, Jessica attacks them and drains their blood. Adilyn was the only one to survive the attack. ("At Last")

Charlaine possessed the normal abilities of a Faerie. Due to being a Halfling however, her magic was finite.

Retrieved from "https://trueblood.fandom.com/wiki/Charlaine_Bellefleur?oldid=142933"
Community content is available under CC-BY-SA unless otherwise noted.