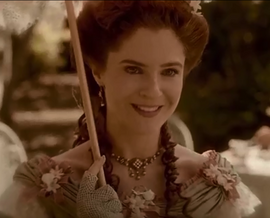 Caroline Shelby was born to Stewart and Claire Shelby, and moved to Bon Temps in around 1855. Coming from an upper-class Southern family, her reluctant courtship with William Compton was arranged by their parents. Upon meeting, however, Caroline and William are quickly smitten with each other. Caroline admitted to young William that she had been expecting him to be overweight like his father. William admitted that he also had had low expectations from his father's old-fashioned description of her as "comely." ("May Be the Last Time")

When the Civil War broke out, William and Caroline attempted to escape to the North with Minus and other runaway slaves to avoid conscription into a war that they knew was a lost cause. They were caught by William's old frenemy Charles Dupont, who shot Minus dead and forced the rest to turn back. William was soon drafted into the Confederate Army and promised to return home to Caroline and their children after the war. ("Lost Cause")

When William does not return from the war, Caroline assumed that he had perished. ("It Hurts Me Too")

Three years after being made vampire, Bill returned to his human home after becoming concerned for his family's welfare when a pox epidemic broke out. Overjoyed to see him, Caroline inadvertently invited her vampire husband into the house, and revealed that their son Thomas had died from pox. Unable to control his emotions, Bill began to weep, and Caroline became frightened by his bloody tears. Believing him to be a demon, she shot him with her shotgun, only to watch the bullet wound heal immediately. She began to flee the house, only to be stopped by Bill's maker Lorena Krasiki, who unexpectedly appeared at her door. In an uncharacteristic show of compassion, Lorena told Bill to glamour Caroline into forgetting their arrival to spare her the pain of seeing her husband as a vampire. She and Bill then buried Thomas in the Bon Temps Cemetery, as no one else was willing to handle a corpse inflicted with pox. Caroline never saw Bill again. ("It Hurts Me Too")

While at a ribbon cutting ceremony for a senior citizen's center, Bill expresses his thanks to Caroline. He mentions what a great citizen she was, as she planted many of the trees with the Arbor Society. He named the center in her honor. ("She's Not There")")​ 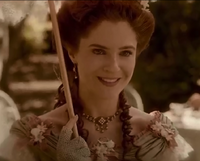 Retrieved from "https://trueblood.fandom.com/wiki/Caroline_Compton?oldid=143046"
Community content is available under CC-BY-SA unless otherwise noted.