Sookie's painful childhood revelation about her Uncle Bartlett spurs Bill into vengeful action. Despite her skepticism, Tara agrees to pay for an exorcism to purge Lettie Mae of a demon. In search of V juice, Jason travels to Fangtasia, where he bonds with an adventurous young woman named Amy. A trio of rednecks decide to exact vigilante justice on a pack of vampires who crashed Merlotte's in search of their wayward mate Bill.

After taking Sookie’s blood and her virginity, Bill and Sookie soak in a warm bath. She feels comfortable enough to reveal a dark secret. When she was a young girl, she was molested by her Uncle Bartlett. As she told this she failed to notice the hateful, frightening look on Bill’s face.

A desperate Jason tries to score more V from Lafayette who throws him out saying he will not sell anymore to someone as irresponsible as Jason. He then drives to Sookie’s house and tries to take some of Adele’s old silver and jewelry to sell, until Sookie stops him.

Tara attempts to smooth things over with Sam but is interrupted by a call from a bank, where Lettie Mae was making a scene with the Bank manager. She accuses him of being a bigot for not giving her a loan for her exorcism. Tara drags Lettie Mae away, but not before she offers to have sex with the loan officer in exchange for the money. After this, Tara agrees to pay for Lettie Mae’s treatment.

Jason winds up at Fangtasia, desperate for V. He foolishly attempts to buy some from the vampire bartender, Longshadow. A young woman named Amy Burley overhears. She pretends to be his girlfriend and gets Jason out of danger with a promise of V.

Tara and Lettie Mae go into the woods to meet a mysterious woman named Miss Jeanette, a witch doctor who lives in a rundown bus. After handing over four hundred bucks, Lettie Mae gets her exorcism. Just as they are about to leave, Miss Jeanette tells Tara that she has a demon as well. One worse than her mother's and that if she ever wants to lead a happy life, she must have it exorcised. Tara laughs it off and they leave.

At Merlotte's, Sookie’s mood gives the previous night’s events away. Both Sam and Arlene are very judgmental of Sookie’s decision to sleep with Bill and let him feed on her. Sookie tells everyone in the bar to mind their own business.

In the dead of night, Bill hunts down Uncle Bartlett. He murders him and dumps his body in a nearby river. Merlotte’s is crashed by Malcolm, Diane and Liam who menace the bar's patrons. Luckily Bill shows up in time to stop them from hurting anyone. They promise not to cause more trouble if he goes with them and stops messing around with humans. Bill agrees, leaving Sookie heartbroken.

Amy and Jason wind up at his place. They take some V and wind up in bed together.

Chuck, Wayne and Royce, furious at the trio of vampires, plot to kill them. Sookie tries to get Sam to intervene, but he refuses to get involved. At the break of dawn, the three rednecks set fire to the house in which Malcolm, Diane and Liam were residing. Sookie searches Bill’s house, hoping to find him, but he isn't there. Getting desperate, she races to the vampire trio’s house. When she arrives she finds rescue workers pulling four burnt coffins out of the charred remains of the house. 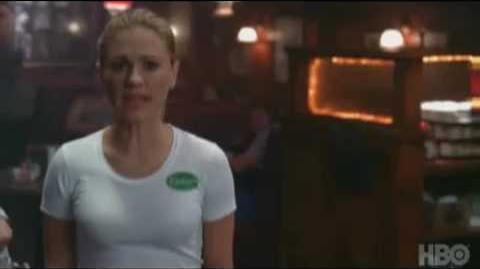 Arlene Fowler: "Suppose she gets pregnant. How in the world can she nurse a baby with fangs?"

Jason Stackhouse: "Come on. I'll show my weiner on your website."

Lafayette Reynolds: "Well you go ahead on, hooker with your bad ass. Good for you. It ain't possible to live unless you crossin' somebody's line."