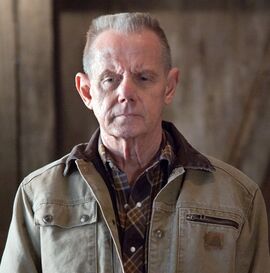 "I’ve had it with this shit. Every time we clear one murder, two more spring up. It’s like crab grass."
―Bud Dearborne[src]

Bud Dearborne was the former sheriff of Bon Temps, Louisiana on the HBO original series True Blood. Played by American starring actor William Sanderson, Bud makes his debut in the series' premiere episode, "Strange Love", in the series' first season. A once major pillar of the Bon Temps Police Station, Bud was the working partner of the town's current sheriff, Andy Bellefleur. A man of few words, the former sheriff was a bit smarter, and much more contemplative than his co-worker Andy, but remained suspicious of vampires, just because they were vampires. In his spare time, he enjoyed square dancing with his wife, and played a recurring role through the series' first, second, third and fifth seasons. Originally retiring from the Police Department in the series' third season, Bud returned in the fifth season to serve as the series' secondary antagonist, and met an untimely demise on the Season 5 episode "Everybody Wants to Rule the World".