Bon Temps, Louisiana is a town located in the fictitious Renard Parish (Louisiana's equivalent to saying "Renard County") on the HBO original series True Blood. The principal location in which most events in the series are based, Bon Temps is the hometown of many of the show's primary characters and has been described as being "in the northeastern part of Louisiana".

Bon Temps is depicted as the typical Southeastern small rural town, with most of its residents being conservative, working-class American citizens.  According to the town's welcome sign, Bon Temps is the self proclaimed "Catfish Capitol of the South", and its "current" population is 2,744.

Bon Temps is located in Renard Parish, Louisiana. It is about 22 miles from the large city of Shreveport and less than 3.5 hours driving distance from Dallas, placing it in between Minden and Shreveport. "Renard" is French for fox. 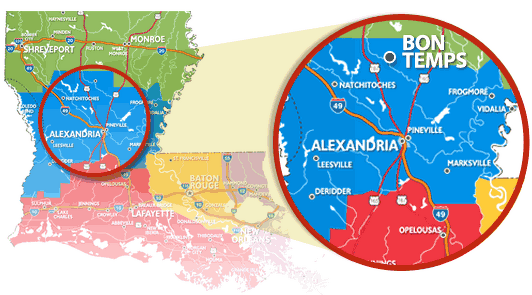 Directions on how to reach Bon Temps, coming through two of Louisiana's most well known cities. [1]

Bon Temps was founded in the early 1800s, likely by French-Americans as the name of the town comes from French. During the American Civil War it was nothing more than 'a hole in the road'. Many of the families living in Bon Temps have descendants still living there today. Sookie Stackhouse's family is a prime example having lived in Bon Temps for 200 years. The Compton family lived there until 2008 when Jessie Compton passed away. Another notable family on Bon Temps is the Bellefleur family, the family appear to be well established and wealthy, the Bellefleurs are related to the Comptons through Sarah Compton's marriage.

However, a Compton did return to Bon Temps, Bill Compton, a vampire and an ancestor of Jessie. There were residents of Bon Temps who fought for the confederacy during the Civil War, including Bill. Many current-day residents are descendants of Civil War veterans and are members of the historical society "Descendants of the Glorious Dead." The mayor's great-grandfather lived during the Civil War, and it is likely that his family have lived in Bon Temps since its founding.

Bon Temps is an old town. It is likely that the oldest building is the church with its graveyard, as the settlers of Bon Temps would have been Christians. It has also been stated that Sookie's house, or at least parts of it, are 200 years old. Also Bill's house is very old. New buildings in Bon Temps would be Merlotte's Bar and Grill and the apartment Tara Thornton stays in during Season 1.

A Main St. in Bon Temps

Jason and Sookie seeing the town in chaos

The wooden "Welcome to Bon Temps" welcome sign. Note that Bon Temps is the self proclaimed "Catfish capital of the South" and that their current (?) population is 2,744.