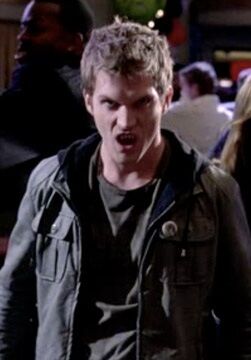 "If she can make us walk into the light, let's chop her fucking head off!"
―Blackburn[src]

Blackburn was the Vampire sheriff of Louisiana's Area 4 on the HBO original series True Blood. Played by American guest starring actor Aaron Perilo, Blackburn is first mentioned on the episode "Bad Blood" at the beginning of the series' third season. An impulsive vampire with a violent attitude and an insatiable lust for blood, Blackburn makes his debut on the episode "Me and the Devil" in the series' fourth season. An old acquaintance of vampires Eric Northman and Bill Compton, Blackburn travels to Bon Temps, Louisiana at the special request of the Vampire King of Louisiana, to deal with the escalating necromancy crisis, but ultimately meets the True Death when he and his colleagues fall victim to the machinations of the powerful witch Marnie Stonebrook. Playing a recurring role through the series' fourth season, Blackburn meets an untimely demise in the Season 4 episode "Burning Down the House".

Blackburn was born in 1927 in Vancouver, Canada. He lived in relative isolation with his family until the age of 31.

One day he encountered a beautiful, starving woman one night in the woods who begged him for his blood. Blackburn consented but on the condition that she turn him. The vampire was true to her word. Blackburn then moved to Louisiana with her eventually, becoming sheriff of Area 4. He is the rare sort of vampire who practices something akin to monogamy.

"So they outed us 400 years ago? Before the great revelation?"
―Blackburn, to Luis Patiño[src]

After Eric Northman's disappearance Blackburn and his fellow sheriffs Duprez, Kirsch and Luis Patiño are summoned to Bon Temps, Louisiana by the vampire king of Louisiana, Bill Compton. At the king's mansion the sheriffs discuss the role of vampires in the Spanish Inquisition, and attempt to reach an agreement on how to deal with the threat posed by Marnie Stonebrook and her coven. Blackburn is in favor of killing her, but is reminded by his king that such an action has been prohibited by the American Vampire League, and will result in the true death. Blackburn nods in agreement when Pam suggests torturing Marnie instead of killing her. ("Me and the Devil")

"You want us to willfully silver ourselves?"
―Blackburn, to Bill Compton[src]

Blackburn's fellow sheriff, Luis, is destroyed by the witch Antonia Gavilán de Logroño. Bill orders the sheriffs to bind themselves in their coffins with silver chains, to prevent being forced to meet the sun by Antonia's spell. Blackburn, Kirsch and Duprez order their subjects to evacuate the state of Louisiana. ("Cold Grey Light of Dawn")

When Bill and Antonia agree to meet in Bon Temps graveyard to negotiate, Blackburn is among the reinforcements who lurk out of sight until Bill calls for them. Antonia casts a spell which surrounds the graveyard with mist. The vampires and witches then attack each other. ("Spellbound")

After the battle, Blackburn, Kirsch and Duprez accompany Bill to the "Festival of Tolerance" in Shreveport. The festival is a charity benefit organized by the American Vampire League. Eric arrives at the Dorchester Hotel where the event is taking place and the sheriffs chase after their former colleague, knowing him to be under a spell. The sheriffs seem to corner Eric but have actually been lead into a trap. Antonia is lying in wait for them and, as she did with Eric, places a spell upon them, bringing them under her control. Antonia then has her new pawns kill Bill's security guards in front of the assembled humans, calling it a demonstration of the true nature of vampires. She then commands the sheriffs to massacre the terrified humans. ("Let's Get Out of Here")

In the ensuing chaos, Antonia orders her slaves to kill the king. Kirsch and Duprez are shot by Bill, Eric's memories are restored by Sookie's powers, and after a brief struggle Blackburn is overpowered by Nan Flanagan who rams a pencil into his heart, effectively staking him. ("Burning Down the House")

Blackburn possesses the common powers and weaknesses of a vampire such as superhuman strength, speed, senses, immortality and healing. His weaknesses included a wooden stake to the heart, silver and fire, sunlight will quickly kill a vampire of his age.

Retrieved from "https://trueblood.fandom.com/wiki/Blackburn?oldid=145078"
Community content is available under CC-BY-SA unless otherwise noted.