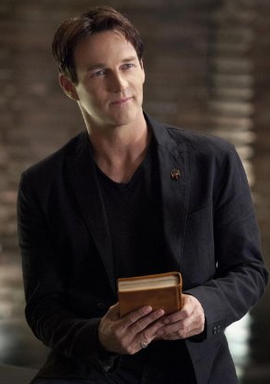 "I am Bill Compton, though clearly, I am something more. I see that now, I see everything so differently now."
―Bill Compton, after drinking Lilith's blood.[src]

William Thomas Compton, born April 9, 1835, and more commonly known as Bill Compton or Vampire Bill, was a major character on the HBO original series True Blood. Played by British starring actor Stephen Moyer, Bill made his debut in the series' premiere episode, "Strange Love", in the series' first season. A former Confederate soldier living in the small town of Bon Temps, Louisiana, Bill was turned into a vampire around the year 1865 when the Civil War ended. At the time of the Great Revelation, Bill had decided to "mainstream" and co-exist peacefully with humans. He has since been converted to the Sanguinista movement and believes himself to be the chosen form of Lilith. Playing a recurring role through the series' first, second, third, fourth, fifth, sixth, and seventh seasons, and becoming one of the series' main antagonists throughout much of its fifth and sixth seasons, Bill was the primary love interest of series' protagonist Sookie Stackhouse. After contracting the fatal disease Hepatitis V, and per his final request, Bill met his demise by Sookie’s hands before he could fully succumb to the disease in the series' finale episode "Thank You", in the series' seventh, and final, season.

After his release from Lorena, he became a more humane, nice, and compassionate vampire who kept his humanity. He never killed humans when feeding on them. Instead he chose to glamour them into forgetting to save them the trauma.

Anyone who's lived as long as Bill has is bound to have a closet full of skeletons, and Bill is no exception. He has done some dark, terrible things in his past, but now he just wants to live a normal life like everybody else. He is polite, kind, and always well-mannered, but he won't hesitate to strike fear into the heart of anyone who crosses him. Possessiveness is one of Bill's traits, but deep down that is his way of protecting those he cares about. He can be a bit dull and he's not exactly fun when it comes to dates, but he's got enough charisma to sweep people off their feet. He'll risk everything, even his life, to be with the one he loves.

When Bill becomes King of Louisiana, his personality makes a marked shift. As King, Bill displays a great deal of professional dedication to his new duties. He does not hesitate to kill vampires or even humans, should the occasion warrant it. These include ordering the True Death of a vampire who was tricked into being filmed while feeding, staking Nan Flanagan and shooting Marnie Stonebrook. He also displayed his darker personality when he betrayed Eric and it is later revealed he had allowed Sookie to be nearly beaten to death so he could bind her to him with his blood. Despite all this, Bill still retains feelings of compassion and love. This is displayed in his interactions regarding Jessica and Sookie. He took on Russell Edgington to protect Jessica and spared Eric the True Death because Sookie loved him.

Over time his personality drifts even farther from his original kindhearted personality. As a member of the reformed Authority, Bill takes on a Sanguinista ideology, although this is likely due to "nest behavior." He seems reluctant at first but after drinking some of Lilith's blood and "seeing" her, becomes fully convinced. He drains a human when asked by Salome and is also the one who thinks of the idea to get rid of mainstreaming by blowing up the Tru Blood factories, making him responsible for the conflict between humans and vampires. He believes he is "the Adam" to Salome's "Lilith."

Although Bill gained an impressive suite of new powers from consuming Lilith's blood he appeared to have changed little in terms of personality after recovering from the initial shock of his resurrection. Show runner Alan Ball has said that Bill has retained his mind and memories, but is now different in an unspecified way.

When Bill willfully offers himself to the vampires who are about to be sentenced to death by meeting the sun the process depletes him to near death. James feeds him his blood and saves him from Lilith's sirens who appear to him as if they are about to rapture him away. He subsequently loses all powers granted to him previously, thus he no longer can enter homes without invitation. His love for Sookie resurfaces and he is in despair over his past actions and how he alienated her from him. He shows great care for the people of Bon Temps as he masterminds the plan with Sam Merlotte to save the human residents from marauding herds of Hepatitis V infected vampires. He is either seeking redemption or desires to keep the truth about Governor Burrell's crimes in the public by the release of a book in which he confesses killing Truman Burrell in daytime. His version would claim he walked in daylight, something which might be taken as impossible thus letting his statements appear as a tall tale.

Bill is over 173 years old, yet retains the appearance and health of a middle-aged man. He is the only vampire known to be able to voice imitate, (as seen in the Season 3 finale, when he imitates Eric Northman). As a vampire, Bill possessed all common vampire powers. He showed a remarkable resistance to sunlight when he sensed Sookie in trouble during daytime. He tried to save her, but in the end the sun proved too much and Bill was severely burned. Bill can glamour people to do his bidding, answer any questions or make them forget about any recent events. He is capable of voice glamouring others.

Bill is unusually strong for a vampire of his relatively young age. This is clearly showcased when he turned a trailer upside down and uprooted a tree making it look like a tornado. He once snapped his maker Lorena's head back 180 degrees and punched her across a room, shattering a framed painting. He was also able to make Eric, a vampire over 1,000 years old, bleed from a single punch to the face. Bill also single-handedly killed three werewolves and maimed one. When Eric first met Bill, he stated that Bill was very strong for a vampire his age. Bill can jump higher and further than humans.

Bill has shown that he can levitate to some degree, when he was preparing to battle Queen Sophie-Anne Leclerq.

After he drank the blood of Lilith, Bill temporarily attained her unique abilities during his incarnation as her prophet:

Like Lilith, Bill's blood acted as an intoxicant to other vampires when consumed, causing euphoria. ("Life Matters") After consuming the blood of the Faerie-vampire Warlow, Bill acquired the indefinite ability to daywalk. ("Don't You Feel Me") He was able to pass on this ability when he allowed other vampires to feed on his blood. ("Life Matters") However, the ability to daywalk was lost for all of the vampires, including Bill, when Warlow was staked which resulted in his True Death. He also subsequently was drained of Lilith's blood entirely, thus ending his incarnation as Billith. ("Radioactive")

After drinking the blood of Lilith, Bill had acquired a capacity of advanced call, this call is far more powerful than a normal one and may cause the progeny to vomit blood and suffer from excruciating pain. Since he ingested Lilith's blood and she is now a part of him, he can also command Warlow as if he was his Maker.