"Beyond Here Lies Nothin'" is the twelfth and final episode of Season 2 of the HBO original series True Blood, and the series' twenty-fourth episode overall.

The mayhem in Bon Temps reaches a fever pitch as Maryann prepares for her ultimate bestial sacrifice, conscripting Sookie to be Maid of Honor at the bloody nuptials. Meanwhile, Sophie-Anne warns Eric to keep the lid on Bill's inquisitiveness; Jason leads Andy into the heroic abyss; and Hoyt has a hard time swallowing Maxine's endless stream of insults. Deliberating on what may be his final move to save Sookie and the town, Sam is forced to put his trust, and his life, in a most unlikely ally; Eric.

"I would've taken you over by now.
Come on, it'll be our little secret. What are you?"
― Maryann Forrester

Maryann appoints Sookie as her "Maid of Honor" in her upcoming "wedding" and asks her to repeat her "electric" touch. Sookie however fails to do so. She is then restrained by an entranced Lafayette. Jason and Andy try to advance on the crowd with an arsenal of weaponry, only to become entranced themselves.

Bill finds Sam at Merlotte's and orders him to come with him to see Maryann. Bill offers Sam to Maryann in exchange for Sookie's safety. Sookie strongly objects to this, but Bill asks her to trust him. Eggs stabs Sam while he is hung from Maryann's offering and offers some of Sam's blood to Maryann. She rubs the blood on her body. Sam has not died and tells Sookie to destroy all of Maryann's ritual offerings. Sookie complies and pushes over the offering statue using her powers.

An enraged Maryann pursues Sookie with her poisonous claws. She is stopped by a bull whom she believed to be the "God Who Comes". Offering herself to the "God", the bull stabs her in the chest with its horns. As Maryann starts to die, the bull transforms back into Sam who finishes the job by removing Maryann's heart. Bill reveals to Sookie that he allowed Sam to drink his blood so he could recover after being stabbed. Bill also thanks Sam for his trust and for helping save the town of Bon Temps. Hoyt learned that his mom, Maxine was not lying about his dad having committed suicide. Deeply disturbed by this, he walks out on her to go find Jessica again. When he arrives at Bill's house, nobody is there. Jessica, after telling Bill she was going to apologize to Hoyt, instead went to a gas station and fed on an unsuspecting truck driver.

Eggs is deeply disturbed by the recent happenings and begs Sookie to help him uncover his actions during his blackouts. With her help he learns that he was the one who murdered Miss Jeanette and Daphne. He is also the one who stabbed Sam. Incredibly distraught over the things he has done, Eggs holds Andy at knife-point begging to be arrested. Andy tries to explain that all of his actions were not of his own free will. Jason, seeing the hold-up from afar, does not realize what is happening and shoots Eggs.

Jason is horrified after realizing he killed Eggs, but Andy takes his gun, wipes it off and tells Jason to leave. Andy says that Jason "was not here and didn't see anything." Tara arrives along with many others to see Eggs shot and killed. Upon seeing his dead body she breaks down in tears.

Bill takes Sookie out to a French restaurant Maison de Paris and proposes to her. Sookie is initially confused and afraid because of all of the recent happenings in her life. She leaves the table and takes a moment to compose herself. She decides that she does want to marry Bill. When she returns, Bill is gone and the place had been ransacked. Bill is captured with a silver chain and kidnapped by an unknown assailant. 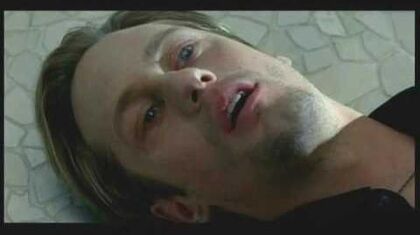 Maryann Forrester: "Was there no God?"

Jason Stackhouse: "Like, if a tree falls in the woods, it's still a tree ain't it?"

Sophie-Anne Leclerq: (as Sophie-Ann has Eric Northman on the ground) "You may be the strongest, oldest vampire in my queendom, but if I wanted, I could own your fangs as earrings."

Maryann Forrester: "Come on, Sookie, it'll be our little secret. What are you?"
Sookie Stackhouse: "I'm a waitress. What the f**k are you?"

Retrieved from "https://trueblood.fandom.com/wiki/Beyond_Here_Lies_Nothin%27?oldid=145271"
Community content is available under CC-BY-SA unless otherwise noted.