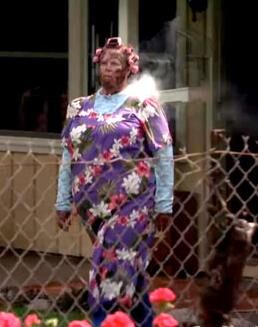 "Beulah! I've been meaning to talk to you about that hedge!"
―Maxine Fortenberry, to Beulah Carter[src]

Beulah Carter was a vampire on the HBO original series True Blood. Residing in a small residential neighborhood in Bon Temps, Louisiana, Beulah lived next door to vampire hater Maxine Fortenberry. Destroyed when the powerful witch Antonia Gavilán de Logroño cast a spell that forced all vampires in Louisiana to rise from their coffins and walk into the daylight, where they then proceeded to burn to death, Beulah appears only on the episode "Cold Grey Light of Dawn" in the series' fourth season.

It is unknown whether or not she received the king's message to use silver to bind herself, or if she was ready to meet the sun. Apparently, her neighbors were not aware that she was a vampire. Maxine attempted to start a conversation with Beulah about her hedge bush. However, she stood silent and watched her burn in awe while she held her water hose. Her only comment was "I knew it.."

Although her age was never specified, she appeared to be quite old judging by how quickly she burned when she was exposed to the sun. During the initial investigation by the Coroner, Andy Bellefleur, and Jason Stackhouse; Andy heavily considered and attempted to drink from her remains, but was prevented from doing so by Jason. ("Cold Grey Light of Dawn")

Retrieved from "https://trueblood.fandom.com/wiki/Beulah_Carter?oldid=143070"
Community content is available under CC-BY-SA unless otherwise noted.