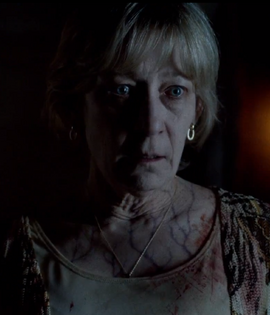 Betty Harris was a fourth grade teacher turned Hepatitis V infected vampire on the HBO original series True Blood. Played by American actress Lily Knight, Betty met an untimely demise during her only appearance, on the episode "I Found You", in the series' seventh, and final, season.

As a Hepatitis V infected vampire, Betty still held onto quite a bit of her humanity. While the other Hep-V vampires bickered amongst themselves and behaved viciously, Betty was able to act calmly. Betty seemed to be a kind person, as she tried to help Arlene and Holly escape from Fangtasia even though she knew that the other vampires would kill her if they found out.

Some time before being made into a vampire and being infected with Hepatitis V, Betty was a fourth grade teacher. She taught Arlene and Holly's children.

A group of Hep-V infected vampires attacked the human/vampire mixer at Bellefleur's, and Betty was among them. The infected vampires abducted a large number of people from the party, Arlene, Holly, Nicole, and Jane Bodehouse among them, and locked them in the basement of Fangtasia, where the vampires were holed up. When Betty was asked to go into the basement to bring back one of the captives for them to eat, she is immediately recognized by Arlene as her children's fourth grade teacher. Arlene and Holly try to appeal to Betty's decency and beg her to help them escape. Betty is initially hesitant, but she eventually relents and says she will try to help them. Later, while the rest of the Hep-V infected vampires are sleeping, Betty goes into the basement to free them from their chains. Due to lack of sleep, Betty needs to feed on one of the captives before she can fully assist them. Arlene volunteers, but, while Betty is feeding, she succumbs to Hepatitis V and meets the true death. ("I Found You")

Retrieved from "https://trueblood.fandom.com/wiki/Betty_Harris?oldid=142926"
Community content is available under CC-BY-SA unless otherwise noted.