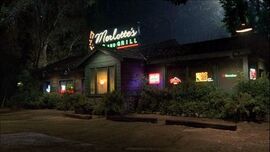 Bellefleur's Bar and Grill, commonly referred to as the "BB&G", is a popular hangout on the HBO original series True Blood. Formerly known as Merlotte's Bar and Grill, it is under the current ownership of owner Arlene Fowler Bellefleur. A restaurant formerly owned by a shifter, Sam Merlotte, Bellefleur's Bar and Grill has a habit of being close to the center of the supernatural and over-the-top happenings in its hometown of Bon Temps, Louisiana. While Sam has said that he opened it as a place for people to come, sit down, and not have to dance, it is likely that most of the occurrences happen due to the shifter also having employed a halfling, a medium, and a witch. Regardless, it remains to be a popular hangout for Bon Temps residents.

Bellefleur's Bar and Grill is a Bar and Grill in Bon Temps, a small rural town situated in Renard Parish, Louisiana. The bar was renamed in 2010 as ownership was passed on to its current owner, Arlene Fowler Bellefleur. The former owner, Sam Merlotte, was the original Bar and Grill's owner, having established the bar, then known as "Merlotte's", shortly after arriving in Bon Temps in the early 90s. One of Sam's original employees, Arlene, was still waitressing at Merlotte's when Sam relinquished ownership of the establishment to Arlene. Upon acquisition of the B&G, Arlene rebrands the nightclub, trying to give it a fresh new look, as Bellefleur's Bar and Grill. She remains the current owner to this day.

Bellefleur's Bar and Grill is located in the small rural town of Bon Temps, Louisiana. It is situated between Arlene's house, which she rents from her former employer, Sam Merlotte, and Sam's Trailer, located behind his former Bar and Grill.

Formerly owned by Shapeshifter Sam Merlotte, Bellefleur's, like its predecessor, tends to have a very poor record of service; many of its employees, including current owner Arlene Bellefleur and former employee Tara Thornton, are rude to the customers on a regular basis. Fights between employees within view of the customers are quite common. Others have ended up dead within weeks of each other, leading Arlene to be concerned that she, too, would eventually be killed.

The former owner, Sam Merlotte, has expressed relief that he possessed the only bar in town. It if wasn't for this reason, very few people would actually come back to Merlotte's.

Deaths in and around Bellefleur'sEdit

Pages advertising the bar and grill's fare listed the items below:

Sam in front of Merlotte's. 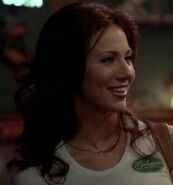 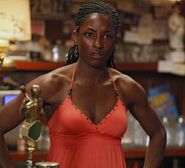 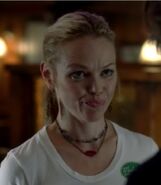 Photo of Alan Ball and Charlaine Harris behind the bar

The logo used at Bellefleur's Bar and Grill

The logo formerly used at Merlotte's Bar and Grill

Retrieved from "https://trueblood.fandom.com/wiki/Bellefleur%27s_Bar_and_Grill?oldid=143611"
Community content is available under CC-BY-SA unless otherwise noted.