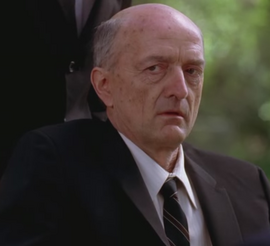 Bartlett Hale was the great uncle of Sookie and Jason Stackhouse on the HBO original series True Blood. Played by American actor Cheyenne Wilbur, Bartlett makes his debut on the episode "Cold Ground" in the series' first season. The brother of Adele Stackhouse, Bartlett meets an untimely demise on the subsequent episode, "Burning House of Love", in the same season.

Bartlett was shown to be a selfish, manipulative man, abusing his great-niece Sookie's trust and young age to abuse her. He did, however, leave Sookie a substantial amount of money in his will, though whether or not this was due to his extreme guilt for what he had done is unknown. Sid Matt Lancaster described Bartlett as a kind man, who he thought of as a friend, which indicates that he had no knowledge of Bartlett's misdeeds.

At some point in Sookie's childhood, Bartlett sexually abused her, harboring vile thoughts for the child. No one knew about this, besides Adele Stackhouse, who threw him out of their lives and never spoke to him again.

Bartlett, confined to a wheelchair, attends his sister Adele's funeral, much to Sookie's dismay. After Sookie storms off from the funeral, she asks Jason how he could invite Bartlett to Gran's funeral. Jason tells her that he has a right to be there, saying that no matter what problems Gran and Bartlett may have had, they don't matter anymore, because they're family. Sookie tells Jason that he doesn't know what he's talking about. ("Cold Ground")

After sleeping together for the first time, Sookie tells Bill that when she was a child her Uncle Bartlett sexually abused her. This led to her Gran running him off and never speaking to him again. Sookie says that she hates that she can't not think about Bartlett at a time like this. Bill silently seethes with rage upon hearing this story.

Bartlett, still in his wheelchair, goes outside to take out the trash, and sees Bill waiting for him. Bill bites Bartlett, killing him. He then dumps Bartlett's body in a creek. ("Burning House of Love")

"Nothing but the Blood"[edit | edit source]

Sookie is visited by a lawyer named Sid Matt Lancaster who informs her that her uncle has died. His body was found in the creek a few miles down south from his house, and it was ruled an accident; Lancaster says that Bartlett was such a sweet old man that no one would possibly want to hurt him. Lancaster hands Sookie a check from Bartlett's estate, saying that he left all of his money to Sookie. Sookie is very uneasy by this new development.

Sookie confronts Bill about the nature of Bartlett's death, and he admits to killing him, because Bartlett hurt Sookie. This makes Sookie feel guilty and responsible for Bartlett's death, so she can't bring herself to keep the money he left her. She goes to find Jason, and tells him about Bartlett's death, much to Jason's sadness. Sookie then gives Jason the check left to her, exclaiming that she does not want it. Jason thought the windfall was a sign from God, so he used it to fund his trip to the Light of Day Institute. ("Nothing but the Blood")

Retrieved from "https://trueblood.fandom.com/wiki/Bartlett_Hale?oldid=145060"
Community content is available under CC-BY-SA unless otherwise noted.