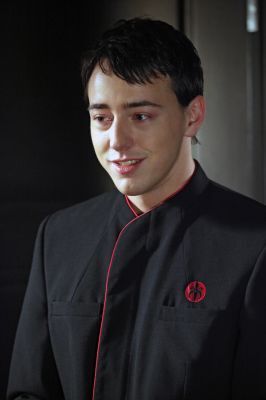 Barry Horowitz, known simply as Barry or "the Bellboy", is a minor character on the HBO original series True Blood. Played by American guest starring actor Chris Coy, Barry makes his debut on the episode "Shake and Fingerpop" in the series' second season. A halfling with the power of telepathy, Barry is a porter who works at the Hotel Carmilla in Dallas, Texas. When Sookie Stackhouse and Bill Compton stay at the hotel during their investigation of Godric's disappearance, Barry is the bellhop who assists them. Playing a recurring role through the series' second and fourth seasons, Barry was last seen on the episode "She's Not There", at the beginning of the series' fourth season.

Barry Horowitz is a porter at the Hotel Carmilla.

Sookie discovers that he is a telepath like her. ("Shake and Fingerpop")

When Sookie and Hugo Ayres are trapped in the basement of the Light of Day Institute by Steve Newlin and Gabe, she summons Barry to get Bill to come and rescue her. ("Never Let Me Go")

However, when he does so, he is captured by Lorena Krasiki who is also holding Bill hostage. ("Release Me")

Lorena feeds on Barry but his life is spared thanks to Bill's intervention with a flat screen TV. ("Timebomb")

Sookie next sees him when she first arrives to the fairy's world accompanied by his fairy godfather Lloyd. He quickly falls into the trap by the light fruits. His status is currently unknown. ("She's Not There")

Barry is a Halfling and possesses telepathy, like Sookie. Barry can read minds and hear other people's thoughts. He can also scan or detect minds and other telepaths. Barry can telepathically call or contact Sookie possibly whenever he wants to but they have to be at a distance or know where they are.