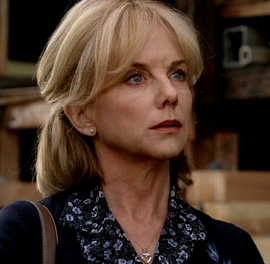 "You know who killed her?"
―Barbara Pelt, to Alcide Herveaux[src]

Barbara Pelt was the werewolf mother of Debbie Pelt on the HBO original series True Blood. Played by American guest starring actress Linda Purl, Barbara makes her debut on the episode "Whatever I Am, You Made Me" in the series' fifth season. Looking for answers relating to her daughter's disappearance, Barbara appears once more on the subsequent episode, "We’ll Meet Again", in the same season.

"Whatever I Am, You Made Me"[edit | edit source]

Sheriff Andy Bellefleur arrives at his office in Bon Temps, Louisiana and is mocked by his subordinates for an indiscretion. Furious, Andy demands they get back to work. He turns his anger on the newly arrived Barbara and Gordon Pelt, Debbie 's parents. Andy apologizes and then explains that they had found Debbie's abandoned car.

Debbie's parents find Debbie's long time lover, fellow werewolf Alcide Herveaux, at work, and begin asking him about Debbie's whereabouts, and wanting to know if he was involved in her disappearance. Alcide says that he doesn't know where she went since he abjured her. He explains that Debbie was back on Vampire Blood (V), and had cheated on him with their packmaster, Marcus Bozeman. Alcide says that Debbie is probably with some vampire. Her parents reveal that her car was found abandoned with her purse and all of her money inside. They tell him they will be at the Sunshine Inn, where he can get ahold of them, if he learns anything of her whereabouts. Both Alcide and Sheriff Bellefleur make inquiries about Debbie. ("Whatever I Am, You Made Me")

Wanting to provide closure to Debbie's parents, Alcide comes to the their motel and tells them that Debbie was killed by their packmaster, Marcus Bozeman. ("We’ll Meet Again")

Retrieved from "https://trueblood.fandom.com/wiki/Barbara_Pelt?oldid=134976"
Community content is available under CC-BY-SA unless otherwise noted.