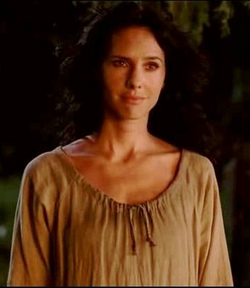 "I was trapped between worlds for four-hundred years. Lost and driven mad by my rage. I do not want that for you."
―Antonia Gavilán de Logroño to Marnie Stonebrook[src]

Antonia Gavilán de Logroño, initially known as The Spirit, was the main antagonist of the fourth season of the HBO original series True Blood. A powerful witch during the 17th century, Antonia turned to necromancy to save her village from fever. Unjustly prosecuted by the vampires of the Roman Catholic Church during the Spanish Inquisition, Antonia wandered the earth as a vengeful spirit for centuries.

Antonia was a powerful witch who originally lived in the city of Logroño in northern Spain during the late sixteenth century. She became a necromancer in order to save her village from fever; she served as a midwife as well as a healer. During the Spanish Inquisition, Antonia was fed upon by vampires hiding out as priests within the local Roman Catholic church, raped by the vampire Luis Patiño (now one of Bill's sheriffs in Louisiana) at his maker's behest, and in 1610, at the height of the Spanish Inquisition, burned to death at the stake. As she was dying, she and her fellow witches cast a spell that brought all vampires within twenty miles of Logroño out of the ground and into the sun, destroying them. After she died she became a restless spirit and wandered the world for four centuries, driven mad by her hatred towards vampires.

Antonia first appears by taking over the body of the powerful witch Marnie Stonebrook, after the vampire Eric Northman invades her coven, and threatens their lives. After rejecting his "deal," Eric attacks Marnie and a hex is placed upon him by Antonia. ("You Smell Like Dinner")

Yearning to taste her power again, Marnie asks that Antonia bless her, in exchange for her loyal service. ("If You Love Me, Why Am I Dyin'?")

After Jesus Velasquez, Lafayette Reynolds, and Tara Thornton convince Marnie to break the spell, Pamela Swynford de Beaufort, better known as "Pam" mocks Marnie's attempts and threatens her for progressing too slowly. Antonia takes over once again, and curses Pam with a spell that causes her skin to decay. As Pam flees into the night, Antonia departs, and Marnie faints. ("I'm Alive and on Fire")

Alone and afraid in her cell, Marnie desperately summons Antonia’s spirit and begs her for protection. After revealing yet another vision of her previous life, Antonia is able to fully and successfully possess Marnie as her human vessel. ("I Wish I Was the Moon")

After fully possessing Marnie, Antonia makes an escape as Katerina Pellham and Luis Patiño die in the process. She later comes across a saddened Tara Thornton, whom she convinces to join her coven. After Tara recruits the local witches to join Antonia's cult, she sets forth with casting the same spell she cast 400 years ago, to call all vampires into the sun. ("Cold Grey Light of Dawn")

After the discovery of her insufficient ritual, Antonia becomes furious, and begins to plan yet another attack on the vampires. However, her motivations are soon interrupted by Bill Compton, who apologizes for her unjustly death, and asks to make peace. After Antonia agrees to meet the Vampire King, they later come face-to-face at the Bon Temps Cemetery. As neither vampires nor the witches trust the other, they are each supported by their own reinforcements. As Bill attempts to make an agreement between the two, all seems well until Sookie reads Antonia's mind and finds that she is casting a spell. During the scuffle Eric Northman impulsively kills Beverleen. As the battle between the two species emerges, Antonia bewitches Eric with a spell to captivate him as her willing slave. ("Spellbound")

Later that night, as the coven begins to question their faith in Antonia, she and Roy plan yet another attack against the vampires. However, Antonia is later visited by Debbie Pelt, who provides a distraction while Sookie Stackhouse attempts to free Eric. Before her escape, Sookie listens in on Tara‘s thoughts, which warn her about Antonia‘s plan to kill Bill during the "Festival of Tolerance." As Antonia and Roy prepare for battle, she casts a spell to seal the other witches inside, to prevent them from leaving. After using Eric to lure Blackburn, Duprez and Kirsch away from their stations, Antonia bewitches them to aid Eric in his attempt to kill the Vampire King of Louisiana. ("Let's Get Out of Here")

Fueled with anger and desperation, Sookie manages to break Antonia’s spell upon Eric by blasting a ray of light from her hands. After realizing the damage and destruction caused by her magic, Antonia attempts to abandon Marnie and her diabolical goals. As it turns out, throughout the entire process since Antonia’s arrival, Marnie has always been in control over her own actions. Later that afternoon, Jesus infiltrates the Moon Goddess Emporium, in hopes to save Marnie. However, he soon discovers that Antonia is the victim, and Marnie is responsible for the recent attacks. ("Burning Down the House")

Marnie uses her telekinesis to control a knife to stab Casey. Antonia angrily attempts to leave Marnie's body and, because of Marnie's evil actions, wishes to end their union. However, Marnie forces her to stay by binding her with a binding spell. Jesus tricks Marnie, claiming that Casey is still alive but needs help. He and Lafayette go to the storage closet with Casey's body and perform an enchantment that breaks Marnie's binding spell allowing Antonia to free herself and move on to the afterlife dispelling all her spells. Without Antonia's powers, Marnie is left defenseless and shot to death by Bill. ("Soul of Fire")

Antonia returns a final time on Halloween to calm Marnie's vengeful spirit. Together with Antonia was also Sookie's grandmother, Adele, and other spirits from the Bon Temps Cemetery. They convince Marnie that allowing Bill and Eric to live would not be letting them win, as vampires will be denied the peace of the afterlife and constrained to the pain of life until they meet the true death. At the end, they lead her into the afterlife. ("And When I Die")

Antonia was ultimately a kind-hearted and loyal person. She originally turned to magic to help her diseased village. When she was abused by vampires during the inquisition, it instilled a hatred within her of all vampire kind, which she viewed as inherently evil. Her hate drove her to refuse to enter the afterlife until she had purged vampires from the earth. She eventually repented when she saw the harm that her crusade was causing. She accepted the peace of the afterlife and even helped to save the lives of Bill and Eric.

Antonia appears to be a young and extremely beautiful woman in her late 20's to early 30's. She had long dark, curly hair and brown eyes. During her life in prison, she was forced to wear a long, flowing tattered dress and was covered in. dirt, an appearance she brought with her to her time in the 21st century.

Antonia Gavilán was shown to be the most powerful witch and one of the most powerful characters on the show. It is implied that somehow her powers and abilities are specialized to exterminate vampires; her most powerful and offensive spell is her incantation that awaken vampires within a 20-mile radius, forcing them to walk into the daylight burning themselves.

Antonia had the typical weaknesses of a human while she was still mortal.

As a spirit, she was still bound to the afterlife and could not physically interact with the physical plane. She could also be bound by magic.

Antonia burning at the stake. 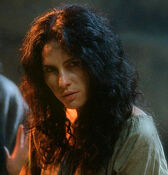