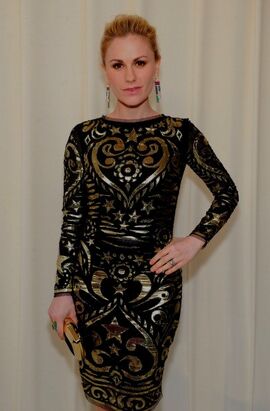 Anna Paquin, born July 24, 1982 in Winnipeg, Manitoba, is a Canadian Kiwi actress who plays the role of protagonist Sookie Stackhouse on the HBO original series True Blood. Making her debut in the series' premiere episode, "Strange Love", in the series' first season, Sookie plays a prominent recurring role through the series' first, second, third, fourth, fifth, sixth, and seventh seasons. Winning a Golden Globe for the role, Anna plays the role of a halfling, which is a human/faerie hybrid. Her Fae heritage is so extremely diluted, however, that her Faerie powers are limited and finite. Descended from Niall Brigant, the King of the original tribe of Fae, Anna was last seen in the series' finale episode, "Thank You", in the series' seventh, and final season.

Anna Paquin, the young Canadian who grew up in New Zealand and whose only acting experience was as a skunk at a school play, stunned movie-goers from all over the world with her performance as Holly Hunter's angry young daughter in the acclaimed film The Piano (1993). Anna, who received an Oscar for her performance (the second youngest Oscar winner ever), has proven that The Piano (1993) was only the beginning of a fabulous career. She has been in a relationship with co-star Stephen Moyer since the series' pilot and became engaged in August of 2009.

On August 21, 2010, Anna and Stephen married in a small, private Malibu, California ceremony.

On April 17, 2012, it was announced that Anna is expecting their twins in the Fall. Her pregnancy won't be written into her character's storylines."True Blood handle on Anna's growing baby bump." In June 2012, it was announced that Anna was expecting twins. Anna gave birth to the twins, "a few weeks early", in early September 2012, the news first being announced on September 11. The name of the twins son, Charlie, and a daughter, Poppy.