In Season 2, Andy attempted to interrogate Tara and Lettie Mae while drunk which resulted in more humiliation. He then began frequenting Merlotte's, drinking heavily. While investigating a party at Maryann's, he saw the giant pig Tara had claimed to have seen, but it disappeared while his back was turned. Realizing something fishy was going on, he attempted to tell the other cops, but they thought he was drunk again and revoked his badge which only caused him to drink more.

One night while driving, he saw Sam and Daphne Landry (who had shape-shifted as a dog and a pig respectively), he recognized the pig as the one he had seen at Maryann's party. Andy chased the two, but tripped in the valley. ("Hard-Hearted Hannah")

By the time he got back to the party, everyone was under Maryann's spell. However, it did not affect him, and he inadvertently helped Sam escape by firing a shot with his pistol. Unfortunately, his arm was subsequently broken by a "Saucer Eyed" Terry.

He later showed up at Merlotte's and branded the entire town "Devil Worshipers". Everyone dismissed him, but Sam knew he was telling the truth. ("Release Me")

He also appeared when Sam was arrested for Daphne's murder, claiming that Sam was the wrong guy, but the other cops ignored him. ("Timebomb")

Later, while hiding out in the Bon Temps Motel, Sam came to him for help. ("I Will Rise Up")

He and Sam then went to Merlotte's to help Arlene, but when they arrived, they were ambushed by Terry and other "Saucer Eyed" people who chased the two into the walk-in freezer. While in the freezer, Andy grabbed some liquor "to keep his body heat up". 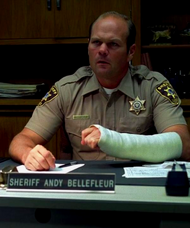 Andy then proceeded to tell Sam a story that his nanny, Annie, used to tell him about the country of the blind where the one eyed man who was king. He told Sam that he was the one eyed king and that he envied this, prompting Sam to reply that he didn't understand what Andy was saying.

Later Jason, armed with a nail gun and a chainsaw got everyone out and freed Sam and Andy from the freezer, but was attacked almost immediately after by the "Saucer Eyed" people. Much to Andy's dismay, Sam gave himself up to be sacrificed to the "God who comes". Later Andy helped Jason disguise himself as the "God who comes" and pretend to "smite" Sam who then shifted into a fly to make it seem as if he had died. ("New World in My View")

Andy and Jason, having no idea what had just happened, thought that Sam was dead, but later had things explained to them when it was revealed that he was a shifter.

Andy seemed to take this news in stride, unlike Jason who kept thinking of various perverse scenarios, like Sam shifting into a dog and having sex with a female dog. This image disgusted Andy, who then asked Jason "what kind of perverted mind would think up something like that?".

Jason persuaded Andy that it was their duty to save the people under Maryann's influence. Andy agreed and they both went to Sookie's house where everyone was partying including Maryann. They went toward the house but, within minutes, they were put under Maryann's spell. When she was defeated, they both woke up and couldn't remember anything. Jason convinced Andy that they must have done something right, and so they must be heroes to the town. ("Frenzy")

Andy gets his badge back at the end of season 2 when Bud admits he can't manage on his own.

Tara's boyfriend Eggs, traumatized by the things he found out he had done, goes to Andy and begs him to arrest him but Andy refuses saying he was under Maryann's control. Eggs becomes increasingly distressed and Jason seeing this thinking Andy was in trouble shoots Eggs dead. Andy takes the gun off him and wipes the fingerprints off them saying he'll take the rap and telling Jason to go. ("Beyond Here Lies Nothin'")